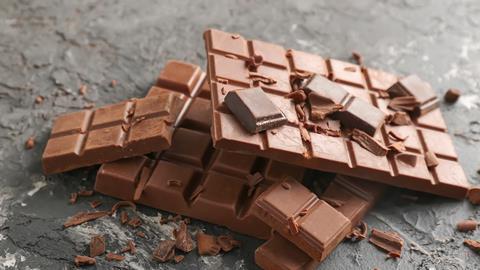 Brits have been munching regularly on chocolate during lockdown, with many finding it a vital way to lift their mood. But the nation is also getting more discerning, with health factors – such as portion size and cocoa content – and ethics also playing a part in buying habits

This research was commissioned by The Grocer and carried out by Harris Interactive independently from Mondelez International.

1. More than one in 10 Brits ate confectionery daily in lockdown 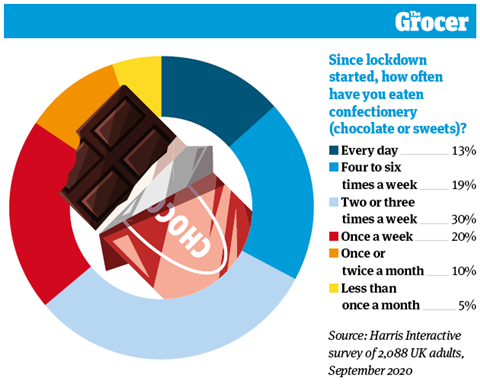 If you weren’t eating confectionery multiple times a week during lockdown, you were in a minority. Six in 10 Brits chomped on sweets or chocolate at least two times a week in the throes of the pandemic, our poll with Harris Interactive shows. And for 13%, that was a daily habit.

Younger consumers were particularly prone to a sweet tooth over this period. A fifth of 25 to 34-year-olds said they had eaten confectionery every day since the beginning of lockdown. That compared with 10% of over-55s.

Perhaps surprisingly, healthier consumers were most likely to indulge frequently. Nearly a fifth of Brits who said they were very concerned about healthy eating ate confectionery every day. 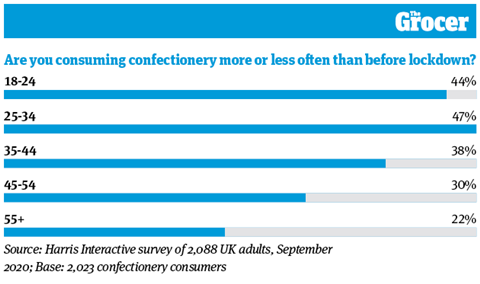 Young people were the most frequent consumers of confectionery during lockdown. But that wasn’t necessarily indicative of their typical habits. A sizeable 47% of 25 to 34-year-olds said they had upped their consumption in the pandemic. Only 22% of the over-55 age group said the same.

Overall, 55% of shoppers said they ate roughly the same amount of confectionery during lockdown. Mondelez International says that reflects sales figures. “In fact, Kantar total market data actually points to a small decline in the total confectionery category, with value and volume sales down in the past 52 weeks across retail and out-of-home compared to the year before,” says trade communications manager Susan Nash.

3. Chocolate bars were the most popular format in this period 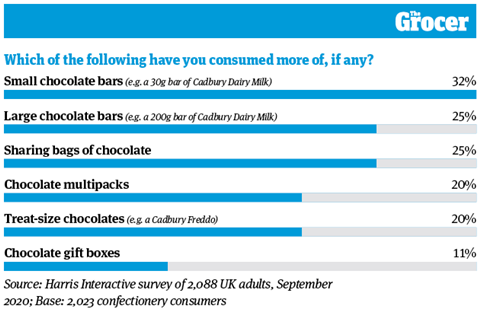 Small chocolate bars had the highest appeal during lockdown. Overall, a third of Brits said they had eaten more single bars during this time, while a quarter said they had enjoyed a higher number of large bars.

Sharing bags were also a popular choice as the nation spent more time on their sofas. And gifting boxes saw the lowest uplift as fewer large gatherings took place.

“It’s clear from the survey that single confectionery bars are still a crucial foundation of the category,” says Nash of Mondelez. “Although we’ve seen some consumers shift some of their purchases of singles into multipacks, the results clearly show the importance of single portion bars.” 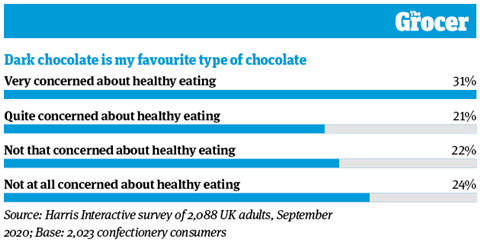 Dark chocolate has been steadily growing in popularity. As Brits become ever more aware of its benefits – a higher cacao content, typically lower sugar content and many naturally vegan options – sales have climbed accordingly.

Those healthier connotations have made dark chocolate particularly appealing to consumers who are concerned about healthy eating, as our chart shows.

The research also highlights why dark chocolate tends to be marketed at older consumers. Dark chocolate has the highest appeal in the 55+ age group. Of these respondents, 32% said dark chocolate was their favourite type. By contrast, only 17% of 18 to 24-year olds said the same. Older shoppers tend to prefer a “higher cocoa hit”, says Nash.

5. More than eight in 10 Brits say chocolate lifts their mood

There’s a reason why we tend to reach for the chocolate when we’re feeling down. More than eight in 10 respondents said eating chocolate improved their mood to some extent. And three in 10 Brits say it ‘very much’ lifts their spirits.

The psychological effect of chocolate is particularly pronounced among young people. Four in 10 of the 18 to 24-year-old age group said chocolate very much lifted their mood. Among the over-55s, that percentage halved to just 20%.

Interestingly, healthy eaters also reported a stronger effect on their wellbeing. A staggering 48% of Brits who described themselves as very concerned with healthy eating said chocolate very much lifted their mood. That figure fell to 20% among those who were not that concerned or not at all concerned about healthy eating.

There were also some slight geographical differences. In London, 37% reported feeling a strong psychological benefit – a figure that fell to 23% in the south west.

And finally, it seems there is a grain of truth to the stereotype of women enjoying chocolate more than men. A sizeable 31% of women said chocolate very much lifted their mood. That figure was slightly lower among men at 27%.

6. Londoners are most concerned about portion control 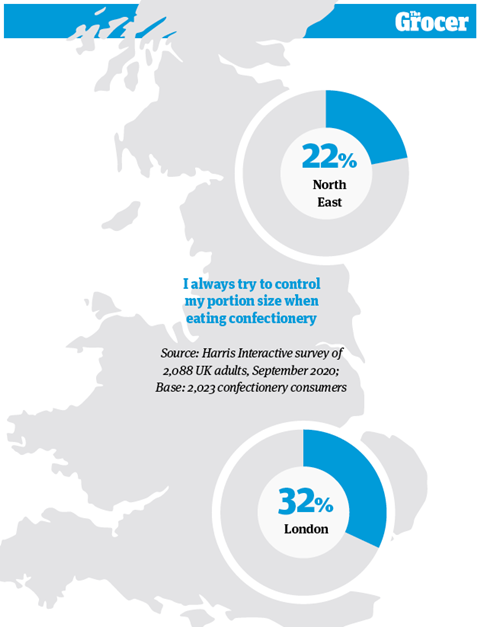 Overall, Brits are pretty aware of how much confectionery they are eating. Nine in 10 Brits said they tried to control their portion size to some extent when chomping on confectionery. While a quarter said they always exercised control, 44% said that was mostly the case and 20% said it was sometimes the case.

There were some demographic differences. A third of Londoners said they always controlled their portions, a figure that fell to 22% in the north east and the Midlands.

Older consumers also emerged as more aware of portion sizes. Among the 55+ age group, 32% said they always sought to control portions. By contrast, only 18% of the 18 to 24-year-old age group said the same. 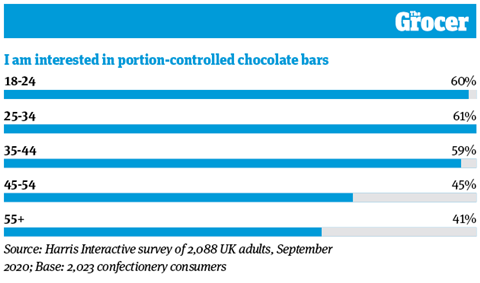 Young people may love chocolate, but they know the power of moderation. Six in 10 18 to 24-year-olds said they would definitely or probably buy portion-controlled bars. That compared with 51% of the overall sample and 41% of over-55s.

As would be expected, these portion-controlled products particularly appeal to the healthy eating crowd. Among those who are very concerned with healthy eating, 73% said they would definitely or probably be interested in these products. That fell to 28% among those who were not that concerned. Women were also slightly more interested in portion-controlled bars than men. 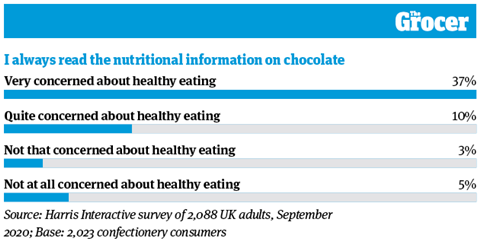 Brits are getting used to checking nutritional information on all food and drink, including confectionery. Overall, 70% of respondents say they look at the nutritional labelling on chocolate to some extent. While 14% said they always check, 24% do most of the time, and 32% check sometimes.

Healthy eaters are particularly likely to analyse the nutritional information, as our chart shows. But that’s not the only demographic difference. Younger people are also more likely to scrutinise fat and sugar content. A sizeable 21% of 25 to 34-year-olds always check nutritional labelling, compared with 10% of the 55+ age group.

9. The majority of Brits are concerned about the ethics of their chocolate 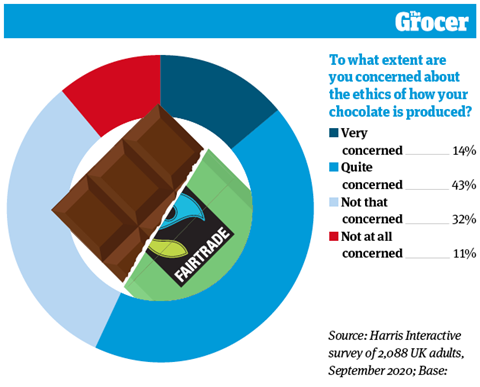 Taste isn’t the only factor that influences chocolate buying habits. Consumers are becoming increasingly aware of how their cocoa fix is produced. Overall, 57% of respondents said they were either very or quite concerned about the ethics of their chocolate. And only 11% were not at all concerned.

There are some slight demographic differences here. While 60% of women said they were very or slightly concerned about ethics, that figure fell to 54% in men.

Londoners also emerged as more ethically minded than the rest of the population. In the capital, 67% are concerned about ethics to some extent, compared with 52% in Yorkshire.

10. Younger consumers are more likely to be swayed by ethical certification 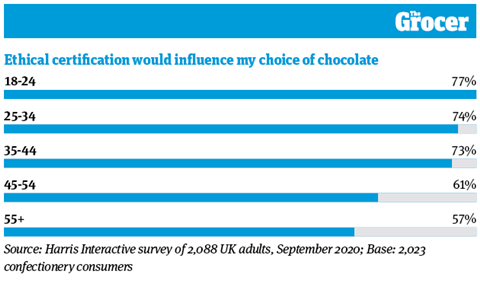 Younger consumers are more preoccupied with the ethics of their chocolate. Indeed, 65% of 18 to 24-year-olds said they were very or quite concerned, compared with 48% of 55+ consumers.

That influence can be significant. Nearly three in 10 18 to 24-year-olds said ethical certification would very much influence their choice of chocolate.