Four secret opera singers - disguised as dinner ladies, canteen staff and a policeman - broke into song with a medley of Verdi, Rossini and Puccini at the Buckinghamshire school.

The reactions of the unsuspecting seven to11-year-olds, who had just been served plates of pesto pasta, were captured by remote-operated cameras hidden in the lunch hall ceiling and posted in a YouTube video this week. While school management were in on the stunt, even teaching staff had not been told what would happen.

The activity is a follow-up to viral video Shopera – which was shot by Sacla’ two years ago at the John Lewis Oxford Street Foodhall and has attracted almost six million views on YouTube. It has been created as the business launches a new foodservice range.

“Sacla’ aims to bring home the spirit of Italy and inject Italian passion and flair into the everyday lives of people of all ages,” said Scala’ UK MD Clare Blampied, who organised the school stunt. “We wanted to share the power of opera with children who have never seen or heard it before live and their reactions were incredible.”

The school medley comprised: La Donna è Mobile from Rigoletto by Verdi; Figaro’s Aria from The Barber Of Seville by Rossini; Libiamo from La Traviata by Verdi; and Nessun Dorma from Turandot by Giacomo Puccini. 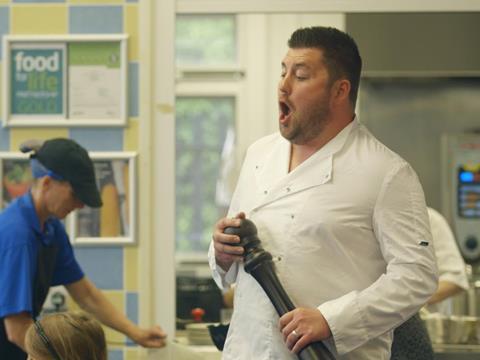