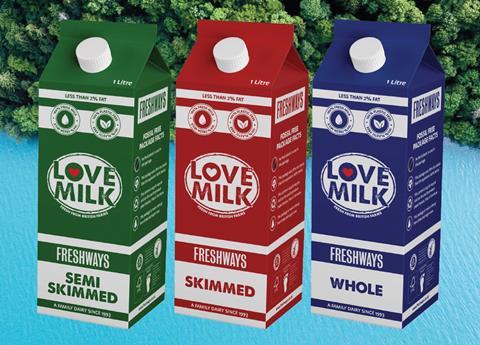 In a joint statement published on Tuesday evening, the pair confirmed an agreement had been reached to create a new combined business – called Medina Freshways Ltd – before the end of the year.

Subject to the merger being approved by the CMA, the new business would have a combined turnover of about £400m, employ 1,000 staff and process in the region of 500 million litres of Red Tractor-accredited British milk a year.

A new complementary board and management structure will be put in place to oversee the merger, ongoing operations and strategic development of the combined business. Medina CEO Sheazad Hussain and Freshways group MD Bali Nijjar have been appointed joint MDs of the new business.

The merger would “create the basis for a viable, long-term, fresh liquid milk business”, the two companies said, and an outfit “with the requisite scale and agility to compete with the two large players which dominate the dairy sector in the UK”.

The announcement brings to an end almost two years of speculation around the future of the two processors, which first emerged after the collapse of rival mid-market processor Tomlinsons Dairies into administration in October 2019. Concrete merger talks were confirmed by the two businesses in February. However, the two parties have been working together in a looser capacity for over a year on some initiatives, including the co-branding of some products.

Windsor-based Medina and West London-based Freshways have both endured difficult trading conditions over the past three years, leading to low returns that were exacerbated by the closure of the hospitality sector at the start of the first coronavirus lockdown.

“Throughout our discussions it has become increasingly apparent how complementary both businesses’ capabilities and cultures are,” said Nijjar and Hussain.

“As such, through merging we will be able to harness these synergies to create a leaner, more agile and fit for purpose business. A business that will benefit customers, consumers and suppliers and ultimately, we believe, will be well placed to grow and develop in a sustainable manner for the long term.”

It comes as Freshways this week unveiled plans to launch a new range of milk, sold in carbon neutral cartons, under the ‘Love Milk’ brand previously owned by Tomlinsons, which was acquired by Freshways from the processor’s liquidators.

Nijjar said the ‘fossil free’ cartons were a response to the government’s plan to introduce a plastic packaging tax from 2022. They will be made from paper derived from sustainable sources, while the cap was planned to be manufactured using alternative sources such as sugar cane.

The combined Medina Freshways business plans to manufacture the product at Medina’s former Watson’s Dairy plant in Hampshire, which was closed by the processor last October after it decided the site was “unviable”.

The plant remained a “fully accredited factory, so it’s a good and easy option”, said Nijjar. The supplier hoped to bring the product to market within the next six months.

“We’re targeting both the convenience channel and the multiples and it’s an opportunity to generate different revenue streams at higher margins,” he added.