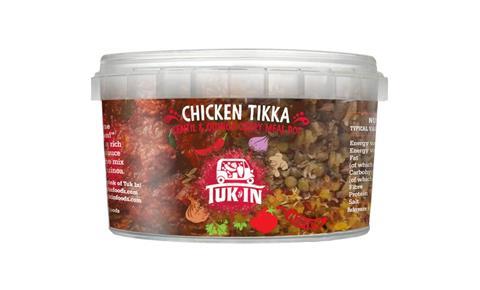 The pots have rolled out at Co-op stores in two variants: Chicken Jalfrezi and Chicken Tikka (rsp: £3.20/350g)

Indian-inspired brand Tuk In Foods is expanding its to-go range with a duo of nutritious curry pots developed in collaboration with the Co-op.

The lentil and quinoa-based meal pots are high in protein and low in saturated fat and sugar, making them “a really wholesome option for food-to-go customers”, said the brand.

Both pots provide over 60% of the recommended daily amount of protein and weigh in at around 400 calories per serve, the brand added.

They have rolled out at Co-op stores in two variants: Chicken Jalfrezi and Chicken Tikka (rsp: £3.20/350g).

Tuk In Foods sales director Paul Grigg said the innovation had been driven by demand from the brand’s online customers, after an initial concept received “rave reviews”.

“This launch builds on an already strong relationship with the Co-op, who already stock our award-winning range of Curry-in-a-Naan”, he added.

The move came at an “exciting time” for the brand, which has been working on a range of NPD after securing £150k of investment at the end of 2020, it said.

The funds came from a combination of new and existing private investors, a couple of whom are part of Rothschild & Co’s M&A team, said Tuk In.

Last September, the brand expanded its ready meal lineup with a range of meals developed in collaboration with Michelin-starred head chef Sajeev Nair.