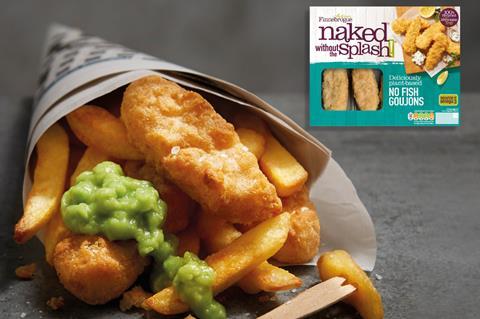 The meat-free beef and chicken SKUs have both been made using wheat and pea protein, with the Teriyaki Strips having been on sale in Tesco stores since the end of March and the Southern Fried Goujons having rolled into Morrisons stores from Wednesday (21 April).

Meanwhile, the brand’s first seafood-style NPD has been made using potato flakes, rice flour, vegetable fibre and lemon juice encased in a wheat flour-based batter and is said to be a source of omega-3. Finnebrogue said it hoped the launch would tie in with the “powerful messages” delivered by Netflix’s Seaspiracy documentary.

The Naked without the Splash product also went on sale on Wednesday, with listings in both Sainsbury’s and Morrisons.

“These latest additions to the Naked range not only extend the choice of delicious plant-based foods for our very loyal Naked consumers but also mark our entry into all four key plant-based categories – imitation pork, chicken, beef and fish,” said Sarah Savage, Finnebrogue head of NPD.

“We are at the forefront of developing next-generation plant-based foods that are good for both people and planet. These launches are only the start of what we intend to develop over the coming months and years to come, with our restless innovation focused on making plant-based food as nutritious, delicious and sustainable as it can possibly be.”

The launches come almost a year after the Northern Irish supplier extended its Naked brand to include plant-based products and follow significant expansion of its plant-based production capabilities with the opening of a dedicated £30m facility at its County Down HQ in December 2020.

While being primarily targeted at consumers pursuing flexitarian diets, Finnebrogue Artisan’s chairman Denis Lynn said the Naked brand’s mission was also to provide food “which is good for our customers and good for the planet”.

According to its latest accounts filed with Companies House, the business’s parent company Lynn’s Country Foods doubled turnover to £142m over an 18-month accounting period to 28 February 2020.

At the time, it said it had avoided any major issues in transporting product between Great Britain and Northern Ireland, despite the disruption to trade over the Irish Sea since Brexit.