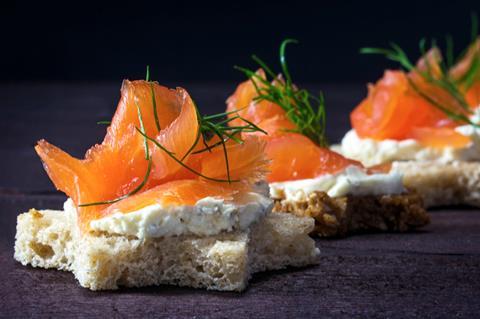 Tesco is to introduce an on-the-go branded seafood range to its cold deli offering after seeing an increase in the popularity of ready-to-eat fish.

The retailer is the market leader in chilled seafood among the mults, with a 23.9% grocery value share [Kantar 52 w/e 6 September]. It will roll out the new feature, which will sit towards the back of store, in 130 sites from 23 November.

Set to include products such as pâté, smoked salmon and hot and cold-smoked trout, the range will include premium brands such as Yorkshire’s Bleiker’s Smokehouse and Arbroath-based RR Spink & Sons.

For Bleiker’s, it marks a second major listing for its smoked fish products since a major brand overhaul at the start of the year. The brand moved from a regional listing to a national one with Morrisons in March, rolling out across 260 stores.

A Tesco spokeswoman said the new range represented a ­continuation of the retailer’s mission to “look out for new and exciting products”.

The move marks the first major seafood ranging and merchandising innovation by the supermarket since it introduced its Yo kiosks in large-format stores in 2019. The restaurant chain provides made-to-order sushi as well as bestsellers and ready meals at 52 Tesco stores nationwide.

Tesco also said it had now reopened the “vast majority” of its fish counters, following their closure at the start of lockdown in March.

The ones yet to reopen were set to feature a new self-service offering when they came back on stream in the coming weeks, it added.

Overall chilled fish sales have grown 2.7% in value to reach £1.99bn in the year to 6 September [Kantar]. Despite the widespread closure of fish counters in many retailers, chilled salmon sales saw growth of 4% in both value and volume.