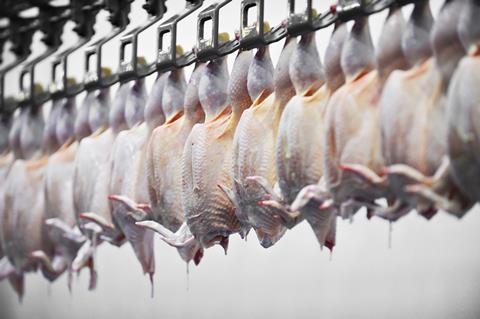 The closure of just one poultry factory can knock out 10% of UK processing capacity, with limited room on farms forcing culls

Poultry factory outbreaks could cause shortages and have already led to a mass culling of birds on backlogged farms, processors have warned.

His comments came after an outbreak forced 2 Sisters Food Group to temporarily close its Coupar Angus plant last week, while Banham Poultry partially closed its facility in Norfolk this week after its own outbreak, with 75 positive cases confirmed at the site by Thursday.

Given the consolidated nature of the sector, the closure of just one major processing plant, such as Coupar Angus, in effect knocked out 10% of UK poultry processing capacity, Griffiths said.

That equated to an average of 400,000 birds a week that would need to be kept on the farm or moved to another facility.

This situation “could not be sustained” indefinitely, Griffiths warned, with more than 100,000 birds on two farms being culled in recent weeks.

“As an efficient sector, there is very little spare capacity should one of those large slaughterhouses be forced to cease operations,” he added.

Just like the disruption faced by the sector during the Co2 crisis of 2018, any drop in throughput caused by factory outbreaks could ultimately lead to supply shortages, in addition to “bird welfare failures on a significant scale and even commercial failures and employment losses that may not be recoverable”, Griffiths said.

“We have to prioritise the health of people in our community, but we also need to safeguard food supply and the welfare of our animals,” he pointed out, as he called for more government support on the issue.

“We’ve already put this to Defra. We need their support for a presumption to keep operating in these situations, rather than closing,” he said. “Where possible we have to maintain throughput, even if it means having skeleton staff in plants.”

A Defra spokeswoman said the government was “closely monitoring the impacts of any coronavirus outbreaks across the food industry, including poultry processing factories to ensure we are fully aware of the scale and risk of any closures”.

She added: “As we have seen in recent months, the UK has a large, diverse and highly resilient food supply chain – which is able to cope with unprecedented pressures – and we do not anticipate any food shortages as a result of potential factory closures.”