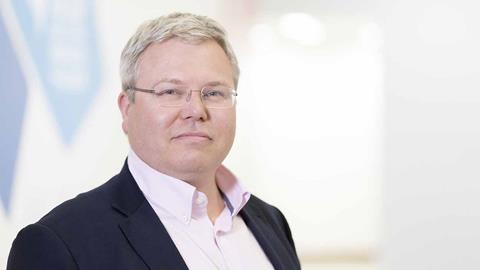 Sebastian Munden talks vegan Baconnaise, smelly teens and green ads – and how all this work is connected by purpose

Sebastian Munden is a talker. And that could just get him in trouble with his next appointment. As the self-described “mini CEO of Unilever in the UK and Ireland”, Munden runs a tight schedule. So much so that this interview was only meant to be half an hour, to make way for his next commitment – but Munden has extended the time slot.

So far, we have covered everything from the power of vegan Baconnaise to flaws in the national recycling system, “and we haven’t even talked about the social power of advertising”. It’s all good. At least, like business as a whole, it can do good. Or as he concludes: “I just feel very positive at the moment that out of setback and adversity, we can really create something in the UK in the next couple of years that goes way beyond packs on a shelf,” he stresses.

It probably sounds familiar in the wake of the pandemic, which has prompted a wave of phrases like ‘building back better’ and a ‘green recovery’. And being positive is probably easier for a company such as Unilever, which managed to grow underlying sales by 1.9% in 2020 (although underlying profit fell 5.8%).

But Munden wants to stress these are more than just words. Unilever is busy collaborating with other sectors to take action on global issues like climate change.

Take the advertising industry. It’s one example of Unilever thinking beyond “packs on a shelf” to consider the impact of its entire operation. By sitting on the advisory board of AdGreen, an organisation that works to minimise the environmental impact of ad production, it is looking critically at how media spend is used.

“It’s working with advertising agencies saying ‘hey, what is it that we inadvertently ask you to do that increases your carbon footprint?’” says Munden. That could be flying, or even thinking about “all that paper and glue” that goes into posters. “You ask me what I do in my job – this is what I think about!”

He’s joking, of course, but there is an element of truth to that statement. His role – executive vice president & general manager of Unilever UK & Ireland – requires thinking about the big picture, sometimes in minute detail. Having spent the past 30 years at Unilever in various roles, Munden grasps all the intricacies of the business.

Now at the top, his main job is “connecting people” to make change happen, in a way that aims to be both aspirational and practical. That ranges from talking to external bodies – including retail customers of course – to bringing together people internally.

That internal work is equally important to effecting change. Munden gives the example of Unilever’s global R&D department, also based in the UK. It continues to collaborate closely with the UK & Ireland team, despite the challenges of working remotely. “In a way, we’ve never felt closer to them as we work on the challenges of waste, climate change and plastic,” he says.

One fruit of that collaboration is Persil, which in September switched to plant-based stain removers and biodegradable ingredients, at the same time as revamping its packaging to include 50% post-consumer recycled plastic. “The [laundry] market declined last year but Persil grew share and new buyers,” says Munden, who points to the brand reaching “nearly two thirds of a million new households”. For him, the efforts on sustainability were crucial to getting that new audience.

Which brings us to a particular passion project for Munden, and a key tenet of Unilever’s strategy: brands with purpose. Persil has fulfilled one of the three key aims of this ongoing work, in that it is doing something for the “health of the planet”. (Improving the wellbeing of people or contributing to a fairer, more socially inclusive world are the other two.)

All three are important to Munden, now more than ever. “I think what’s happened in the pandemic is we’ve seen how all three have become more relevant but also more talked about,” he says.

With that in mind, he stands behind the words of CEO Alan Jope, who famously said he would dispose of brands that simply make “your hair shiny, your skin soft, your clothes whiter or your food tastier” without a higher purpose. “They say you only know how much you believe in your strategy if you’re prepared to act on it and it causes temporary discomfort,” says Munden. “What we’ve really done here is ask: ‘Where can our brands really make a difference?’”

For him, all of Unilever’s brands are capable of making that difference – which means Jope may never need to act on his threat. Some are more obviously purpose-led than others, such as Dove (right). But even the more playful ones, like Lynx, are playing a part. “Way back when, this brand had an excellent purpose, which is making sure teenage boys don’t smell. Which, in itself, is a laudable thing to do,” he says.

Now, purpose has taken on a different meaning. “Lynx is about attraction. So first of all it’s widening that space out a bit to acknowledge ‘boy meets girl’ might not be the only version of that which exists. But our brand has been very bold over the years in trying to address male suicide and now tackling racial microaggression,” he says. “The thing is, the brand still has to have its cache with its audience. So the brand in a way is both playful and fun, and has some serious messages to share.”

Surprisingly for a major corporate, Unilever is willing to be experimental in how it communicates these often delicate messages. “We have to be courageous. Sometimes you get the zeitgeist and sometimes you don’t. We won’t always get it right,” Munden admits. “But I don’t think that’s putting us off trying.”

That experimental attitude is equally present in another major purpose-driven goal for the business: plant-based. In November, Unilever unveiled a target to reach €1bn (£860m) worth of plant-based meat and dairy alternative sales per annum within the next five to seven years. Not only is there a clear commercial imperative as plant-based sales soar, but Munden says Unilever recognises “the carbon footprint of meat is high”. It’s hoping to achieve its goal with standalone plant-based brands such as The Vegetarian Butcher, acquired in 2018, and experimental extensions of existing brands, such as the aforementioned Hellmann’s vegan Baconnaise and vegan Magnum.

This portfolio means Munden is confident no further acquisitions will be necessary. “My job is to make it work with the brands we’ve got,” he says. He points to The Vegetarian Butcher, sales of which more than tripled to £3.1m last year [Nielsen], as “perfectly placed”.

“The Vegetarian Butcher is aimed at people who love meat and will continue to eat meat,” he explains. “But what it is says is, ‘look, you’ve got used to eating food in a certain way in certain forms, you have favourite dishes, and The Vegetarian Butcher can help you eat meals that are very similar.’”

This all may come across as Unilever saving the planet single-handedly. Munden admits that isn’t the case. Take recycling, for example. He gets animated when suggested that the move towards boosting recyclability – for its part, Unilever has pledged to halve its use of virgin plastic by 2025, and help collect and process more plastic packaging than it sells – can only gain real momentum as a collaborative effort.

“Yes. Yes!” he says. “First of all, we have to do our bit and our framework is basically less plastic, better plastic, no plastic.” But crucially, it’s about “a combined industry response, not just individual acts of heroism”. That means working with the waste management industry and the government to tackle remaining barriers to recycling – such as regional variations, and the lack of facilities for flexible plastic.

Of course, if you talk to the likes of Greenpeace, recycling is only a small part of the answer. They are pushing for less plastic to be produced in the first place. On this front, Unilever is trying a few different things, but has no solid blueprint for the future as yet. “We’re in learning mode at the moment because for this to work there has to be shopper acceptance,” says Munden. One route is its partnership with the Loop system, which involves selling its brands in durable packaging that is refilled. In what could be an easier solution for consumers, Unilever is also selling concentrated refill products that use less plastic in the aisles, such as Cif EcoRefills.

Amid all this, one thing becomes clear: Munden is keen to measure himself through actions, rather than just commitments. So although he may be a talker, he’s not all talk.

Family: Married to Elisabeth, who is a nurse, with two adult children

Business mantra: There may be a gap in the market but is there a market in the gap?

Career highlight: Being asked to lead Unilever UK & Ireland, and loving it as much as I had hoped

Career mistake: Weekly commuting abroad away from family for too long

Best book I have read recently: Maggie O’Farrell’s Hamnet – vivid, creatively distinctive and elegiacally beautiful for Covid times. Also Tim Harford’s How to Make the World Add Up – great point on watching out for the answer you want to hear, based on the story of an Amsterdam art dealer in the war

Death row meal: Marmite crunchy peanut butter with cucumber slices on home-made sourdough toast: fire up all the taste sensations one last time and savour it