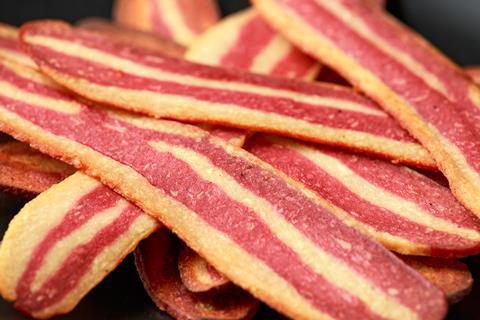 Consumers expect innovative products that help them put more vegetables onto their plates, not copycats that mimic meat badly

I wouldn’t want to be a Veganuary propagandist this January. Even though they can rely on a blizzard of media coverage feeding the fantasy that mock meats are storming our shelves and blitzing meat out of existence, meat sales are resolutely up.

Analysis by New Nutrition Business shows in the UK we spent an extra £600m on meat in 2021 compared to 2020. That’s up 5.3% in sales value. Early data from The Grocer’s Top Products Survey, due to be published later this month, also indicates an increase in retail sales.

Anti-meat lobbyists’ mission to halve our meat consumption by 2030 looks futile. US analysts have set a ceiling for meat alternative sales at 2% of the true meat equivalent. In the UK, says New Nutrition Business, its best hope is becoming a “big niche”.

Could it be that guilt-tripping consumers into shunning meats they know and love for ultra-processed, plant-based lookalikes, which taste dreadful and cost much more per kilo, is not the shrewdest marketing tactic?

And surely fake meat has lost the quality argument? Meat is just one ingredient: meat. Your typical analogue is composed of around 30. People notice the paragraph-long ingredients list on these meat imposters and draw the obvious conclusion.

That green halo offered by the use of the word ‘plant’, which conveys images of leafy greens, fades when consumers discover it refers to a heap of protein powder and oils tarted up with additives. They expect innovative products that help them put more vegetables onto their plates, not unpalatable copycats that mimic meat badly.

No wonder Beyond Meat’s shares plummeted 29% in November alone, according to data provided by S&P Global Market Intelligence, extending its fall to 44% this year to date. This is not a confidence-inducing performance for a vegan hero brand.

Upside Foods, formerly known as Memphis Meats – yet another of those over-hyped, cell-cultured meat start-up companies – promised in 2016 to make lab meat financially viable by 2021. After putting in $200m of investment, prominent investors, including Bill Gates and Richard Branson, have quit.

How much longer can vegan ideologues fly in the face of cold, hard retail facts as high-profile imitation and lab meat enterprises crash and burn?