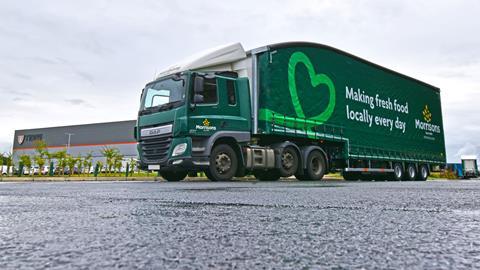 What else might Morrisons earn a ‘badge of honour’ for?

Supermarkets might have benefitted from surging sales during the pandemic, but there is no doubt Covid-19 has still been been costly.

Just look at Morrisons, which today reported a £270m drop in pre-tax profits (including exceptional costs) to £165m for the 52 weeks to 31 January. That’s despite a 8.6% increase in like-for-like sales, compared with a 0.8% fall a year ago, and a tripling of online sales - with capacity now up fivefold.

It follows a share price slump in recent weeks that fuelled speculation the retailer - which achieved near double-digit like-for-like growth over Christmas – could face relegation from the FTSE 100.

Still, Morrisons CEO David Potts remained chipper this morning as he shrugged off the profit fall, which he described as “badge of honour”.

“Frankly we could have made no profit and it would have been a result,” Potts said, as he pointed to the added costs of operating in the pandemic (which totalled an eye-watering £290m). The supermarket’s bigger concern, he added, was that staff had stood up to be counted as key workers in feeding the nation.

Potts also revealed the retailer would extend its 10% discount for NHS workers for the remainder of 2021, while also offering them a free Morrisons ‘anytime’ delivery pass, giving them free delivery on their online shopping for a year as a “way of saying thank you”.

It’s the latest in a growing line of (largely) positive PR moves from a retailer that has plenty to feel positive about – despite the profit plunge.

And it’s worth noting that had Morrisons not chosen to pay back £230m of business rates relief, profit before tax and exceptionals would been up 5.6% to £431m.

When you add that to the gains made via what is now a £1bn wholesale business – buoyed by the success of its Amazon partnership and the announcement last week it would further deepen its supply deal with McColl’s – it’s been a “great year” for the business, said Clive Black, director of Morrisons’ house broker Shore Capital.

“Morrisons’ shares have been in the doldrums in recent times, which we deem to be harsh given its operational achievements,” he added.

Indeed, the retailer’s shares were among the 13 most shorted on the London Stock Exchange, according to trading platform IG Markets this week. It added there was now real “cause for optimism” for investors, given Morrisons’ “emergence as a fully digital, omnichannel supermarket chain”.

Black shared that sentiment in a recent investors note, adding the Bradford-based supermarket had the “strongest big four top-line momentum”.

Among the things that stand the retailer in such good stead, according to Black, is its recent moves to boost one of its original USPs – being a retailer that makes most of its own food.

He described Morrisons’ acquisition of Cornish seafood supplier Falfish last week as “a welcome investment into the British fishing industry” and a “notable further deepening of the group’s commitment to vertical integration”.

Morrisons said the move would see all 20 of its fruit, veg and meat manufacturing sites – which make more than half of the fresh food sold in its stores – entirely supplied from net zero carbon British sources by the end of the decade.

Tellingly, that commitment is five years ahead of its main rivals, and 10 years ahead of the NFU’s 2040 net zero goal for the entire agriculture sector.

With its rivals making commitments to hit the same target by 2035 at the earliest, this is a hugely significant move, and something that’s desperately needed, given recent research by Kite Consulting revealed meat and dairy supply chains in particular were lagging behind in developing actionable plans to reduce emissions.

Potts said Morrisons was “in a unique position to guide our farms and help lead changes in environmental practices” due to its vertically integrated model.

The commitment was “years ahead of industry expectations – and an ambitious target – but it’s our duty to do it”, he added.

With the gauntlet thrown down by Morrisons on so many different levels, it will be interesting to see if its momentum can be sustained, and what its rivals might do next.