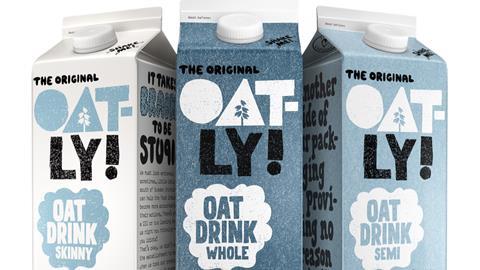 Oats haven’t always been trendy. After all, Johnson’s Dictionary famously defined them as “a grain, which in England is generally given to horses, but in Scotland supports the people”. The definition hardly came across as complimentary (either of oats or the Scottish).

Nowadays you’d be mad to get sniffy about oats. For they are fast becoming a veritable goldmine in grocery. Or at least they will be, if Oatly has anything to do with it. Last year, retail sales of the oat milk brand soared 71.4% to £18.5m [Nielsen 52 w/e 8 September 2018]. That made it the fastest-growing free-from brand in the top 10 by percentage – no mean feat in the highly competitive world of plant-based. That growth shows no sign of slowing. Indeed, at the end of last year Oatly said it was struggling to keep up with demand in the US and the UK.

So it shouldn’t come as a surprise that the Swedish brand is considering investing in a UK factory. Oatly is clear to point out that this morning’s Press Association story, in which chief executive Toni Petersson described the UK as “a big market”, was not confirmation of a new facility. Nothing has been decided at this stage. But it does stand by the prediction that UK sales could reach £40m this year – more than double its 2018 figures. That would make a home-grown production facility a potentially savvy move.

You could accuse that prediction of being overblown. After all, the plant-based market is booming, but it’s growing at nowhere near that rate. The value of the dairy-free market rose 24.2% to £523.4m in the past year [Kantar 52 w/e 24 March 2019]. By comparison, Oatly is talking about growth of over 100%.

How sustainable coffee is going beyond the reusable cup

Still, its forward-thinking approach – an approach that put Oatly’s UK general manager Ishen Paran in eighth place in our plant-based power list – could make that figure more realistic than it sounds.

As Oatly has proven in its home country of Sweden, it is quite comfortable with creating a stir. There, it got into legal hot water with the dairy industry for its controversial marketing slogan, which translated as ‘Like milk but made for humans’.

Not to be deterred, Oatly brought that same controversial slogan to its UK advertising last year. It wasn’t just to cause a bit of uproar. According to Oatly, the campaign helped generate a 45% sales uplift in Sweden. If it can do the same on these shores, it’s already halfway to achieving its goal.

The brand has also gone all-out for the coffee shop market. It made its presence known at the the London Coffee Festival in March with some bold ‘Ditch Milk’ murals dotted around the Shoreditch area. Today, the brand says it is in at least 3,500 UK coffee shops.

Plus, Oatly has been canny in appealing to consumers who aren’t familiar with plant-based milks. In October, it launched Whole, Semi and Skinny products to align itself more closely with dairy conventions.

In a further bid to attract new consumers, it tapped into the growing sustainability debate by publishing its carbon footprint on pack – which it says compares favourably with that of cows’ milk. Presumably, a UK production facility can only help lower this figure.

All of which makes oat milk very much on trend, and could make the upfront cost of a UK factory justifiable. If Oatly can live up to its 100% growth prediction, we  may not be wasting oats on horses for long.