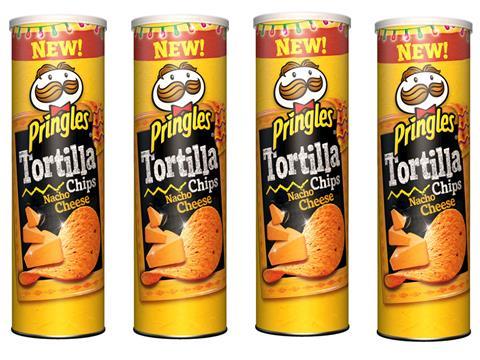 Kellogg’s is going head-to-head with Doritos by taking its Pringles brand into the tortilla chips market.

Rolling out from mid-April, the new corn chips come in a tube can and - rather than adopting the triangular shape traditionally used for tortilla chips - are produced in the Pringles curved oval shape dubbed the ‘hyperbolic parabaloid’.

Available in four flavours - Nacho Cheese, Sour Cream, Spicy Chilli and Original - they use corn flour as a core ingredient rather than the dehydrated potato in regular Pringles. They are made for the UK at the Kellogg’s plant in Mechelen, near Brussels, where the company invested in new cutters to make the product.

Pringles Tortilla made its debut in the US in November 2013 and generated $35m sales in its first year - with 95% of this incremental to the Pringles brand, said Kellogg’s.

The market for large-format sharing tortilla chips was worth about £150m, said Kellogg’s, but had potential to become much larger.

“Consumers think everything looks and tastes the same in the tortilla category,” added Kellogg’s director for snacks Gareth Maguire. “We expect this to drive explosive growth.”

Kellogg’s is backing Pringles Tortilla with a £3.5m spend, including TV advertising from May, PoS displays and experiential tasting opportunities in high-footfall areas.