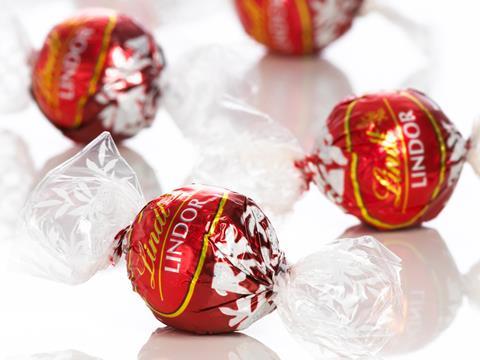 Posh chocolate brand Lindt is going for gold this Christmas with a surge in promotional activity, but bargain hunters will find better savings on Cadbury, Nestlé and Mars products.

However, average savings on Lindt products have dropped by nine percentage points year on year to just 20.6%. “Those looking for Christmas chocolate savings might be better with Cadbury (28.3% saving), Nestlé (35.2%) or Mars (33.6%),” says Assosia director Kay Staniland.

Mars has also ramped up activity compared with last year, with the number of featured space promotions in the mults up 23.9% to 197. Cadbury hiked its number of deals by 7% to 533. Nestlé was the only top 10 confectionery brand to offer fewer promotions than last year, down 37.8% year to 186.

It comes amid a wider increase in promotional activity on impulse, meat, fish & poultry, fresh produce and frozen in the mults compared with last year. “These categories form the foundation for Christmas dinner, party food and stocking fillers,” says Staniland.

However, supermarkets have continued to cut back on booze promotions, with deals on wine, beers and spirits accounting for 18% of total featured space deals, down 0.5 percentage points on last year. Average savings on BWS promotions have fallen by 0.4 percentage points to 28.4%.

Across the grocery market, there has been a drop in promotional activity on last year, with both fewer deals and lower average savings than last year.

“Savings on chilled and frozen food have increased, along with produce and bakery, but savings on all other categories have dropped,” Staniland says.

Shoppers looking for pre-Christmas bargains would have been better stocking up last month, when there were “better average savings (31.5% compared with 30.4%) and a greater number of featured space promotions,” she adds.