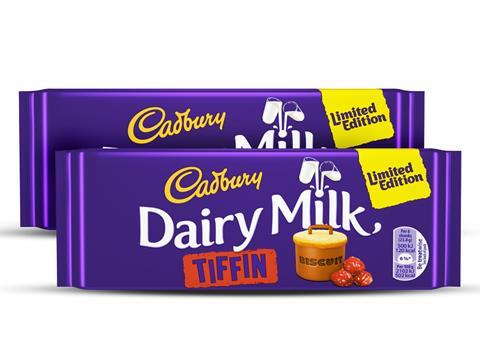 Cadbury Dairy Milk Tiffin is set to hit supermarket shelves again following a 13-year absence, after fans called for a revival of the retro bar.

Originally launched in 1937, Cadbury Dairy Milk Tiffin was withdrawn in 1972 before enjoying a resurrection from 1985 to 2003. It will now return for a second time as a limited edition during the summer, with about three million bars available from 1 June.

The 95g tablet (rsp: £1.49) - which contains biscuit pieces and raisins - was such a “huge success” in its earlier iterations that “consumers have been appealing for its return on social media”, said Matthew Williams, marketing director at Cadbury brand owner Mondelez.

The product was pulled from shelves in 2003 “as part of a major re-launch initiative for Cadbury Dairy Milk”, he added.

The return of Cadbury Dairy Milk Tiffin marks the brand’s latest move to boost incremental growth in small tablet bars, and follows the launch in February of the new Medley range.

“We know consumers are looking for new tastes, experiences and textures so, with its classic recipe, we believe this limited-edition tablet will deliver an exciting eating experience,” said Williams.

Mondelez - which increased earnings by 71% in the first quarter of the year - will be hoping to match last summer’s Strawberries & Creme limited edition bar, which generated £2.3m in its first year, becoming the second fastest-selling Cadbury Dairy Milk SKU [Nielsen 52 w/e 26 December 2015].