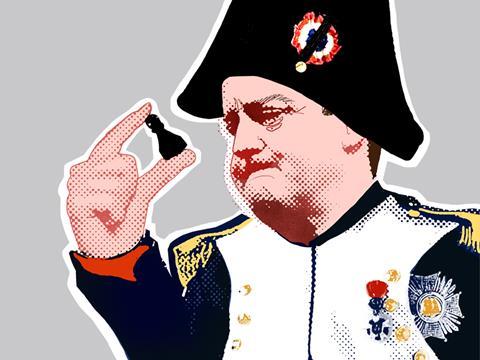 Napoleon Bonaparte once described Britain as a “nation of grocers,” and I’m sorry to say he didn’t mean it in a good way.

Notwithstanding the hostility of this Gallic Camembert-sniffer, I ask you to contemplate the many benefits of remaining a minuscule pawn in a European empire the scale of which even Boney himself could hardly have dreamed.

First, without Juncker (Flemish for junket), who would define our fruit & veg for us? Without clear specifications to guide them, the ambient replenishers of this lightly-educated isle would be filing the cauliflowers alongside the toasters and employing some prehistoric system of measurement involving the use of triceratops skulls to grade the Jersey Royals.

Second: what, exactly, would our food supply chain be without the CAP? How else can we help Albanian organic cashew growers afford to maintain their Mercedes’? You’d be surprised just how towing a plough up the flinty slopes of Maja Jezercë can wear out those German clutches. And there’s more than one Cumbrian viticulturist whose Cuvée Carlisle 2015 couldn’t even be marketed as brake fluid without a helping hand from the EU taxpayer, either.

Then, of course, leaving the EU would force the billions of people whose job it is to interpret Brussels directives on to the dole. It would also mean an end to free movement of labour, and the elimination of Bulgarians would effectively end the supermarket night shift as we know it.

Retailers have long had to deal with the problem of feckless and dishonest staff who can’t communicate in English - having to bring in locals from Clacton and Chatham will only serve to make this situation far worse.