Fresh review of supermarket forecasting to be launched 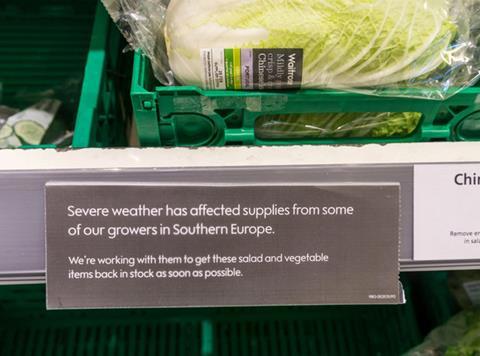 Groceries Code Adjudicator Christine Tacon is to launch a fresh probe into supermarket forecasting to suppliers, despite a year ago clearing retailers of breaching the code over the issue.

Tacon told The Grocer she had received new information to suggest the issue could be more widespread than she first feared.

Retailers could be in breach of as many as four parts of GSCOP, she added. These include rules on transparency, over-ordering, unfair deductions and variation to supplier agreements.

Tacon said retailer forecasting behaviour was one of the key themes of the recent tide of complaints received. These included negotiations related to Brexit and recent fresh food shortages.

With lettuce, courgettes, peppers and tomatoes in short supply, the Adjudicator said supermarkets had been accused of failing to be transparent in forecasting as they tried to keep prices down and sought alternative sources.

Some suppliers had been forced to pay the cost of supermarkets finding alternative sources to try to compensate for the shortages, said Tacon, while other complaints concerned a lack of communication over pricing strategy during the crisis.

Brexit-related forecasting was another cause of complaints, said Tacon, with some retailers accused of introducing price hikes on shelf far above the cost rises negotiated with suppliers.

Although supermarkets have been battling to keep prices down amid calls from suppliers for increased costs, in some cases she said price increases had been put through on products, which had wreaked havoc with supplier forecasts. “There are instances of this happening though it’s not across the board,” she added. The GCA’s new survey is at yougov.com/GCA.