The Collective teams up with Brownlee brothers for limited edition 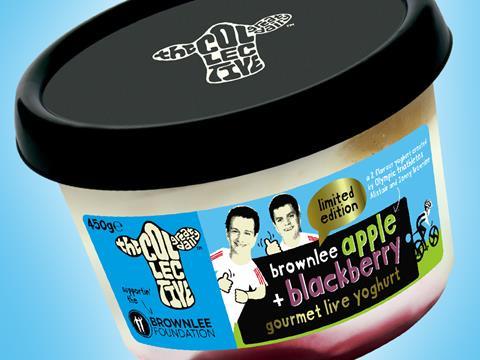 Yoghurt brand The Collective has teamed up with Olympic medal-winning triathletes the Brownlee brothers to launch a new Bramley Apple + Blackberry flavoured variant.

The limited edition, dubbed Brownlee Apple + Blackberry, went on sale this week across the major multiples (rsp: £2), with 5p from the sale of every 450g pot donated to The Brownlee Foundation - which works to inspire children and their parents to get active by offering free triathlons in partnership with primary schools.

The Collective said the new flavour was a UK first because it featured two different and separately layered fruit conserves. It follows the launch of a limited-edition rhubarb, vanilla & lemongrass yoghurt last year, which was developed with chef Anna Hansen, and raised £19,000 for the humanitarian organisation Action Against Hunger.

The brand has a longstanding relationship with Brownlee brothers Alistair and Jonny, with late co-founder Mike Hodgson being a family friend.

“This is an extremely important launch for The Collective,” said co-founder Amelia Harvey. “The release of this limited edition will help the brand meet its dual goal of both supporting social causes close to the hearts of its customers and continuing to deliver innovation to the category.”

Money raised as a result of the partnership will be used to fund five foundation days across Yorkshire in June, which will see an estimated 5,000 children take part in a mini triathlon and every participant provided with a goodie bag containing Collective samples.

“The Collective has the same vision as us to encourage children in the UK to become more active and appreciate their surroundings,” said the Brownlee brothers. “We are delighted sales of this yoghurt will help to raise money for the Brownlee Foundation, funding sporting triathlon events that are designed to motivate children and families to embrace exercise in a fun and enjoyable way.”