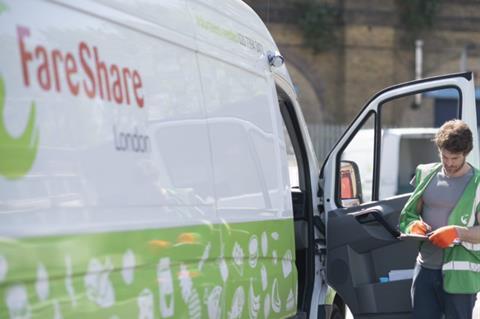 Dairy co-op Arla has hit the milestone of two million meals donated to food surplus charity FareShare in 2020, it has announced.

The supplier, which has been donating food to the charity for more than five years, provided the FareShare network with 838 tonnes of products such as, milk, butter and cheese this year.

It means during its entire partnership with FareShare, Arla has provided the equivalent of five million meals to people who rely on the charity’s work, such as homeless shelters, community cafés and school breakfast clubs.

“With the unprecedented year we have had and the closure of foodservice outlets, we are pleased our products could be redirected to ensure FareShare’s great work continues, combatting food waste and hunger,” said Arla UK’s VP for foodservice, Jonathan Dixon.

It comes after FareShare reported demand for food has more than doubled as a result of the pandemic.

FareShare renews calls for added support over the winter

In a similar move, major processor McCain revealed it had donated more than 200 tonnes of British potatoes to FareShare in the space of two months – contributing towards the equivalent of approximately 492,800 meals for people across the UK.

While McCain has worked with the charity since 2013, the supplier said this was the first time it had provided fresh food to it rather than frozen products.

As with Arla, McCain had also been left with surplus stock this year due to the shutdown of foodservice outlets during two national lockdowns and amid tougher restrictions on public life.

It said a donation of 20,000 apples from Pink Lady Europe had been matched by Kent-based importers of the apple, Total Worldfresh.

“As a brand, we firmly believe every child and family should be entitled to a happy and healthy Christmas and start to the new year, so we’re pleased to be able to support FareShare in this effort,” said Pink Lady PR and social manager Kyla Flynn.