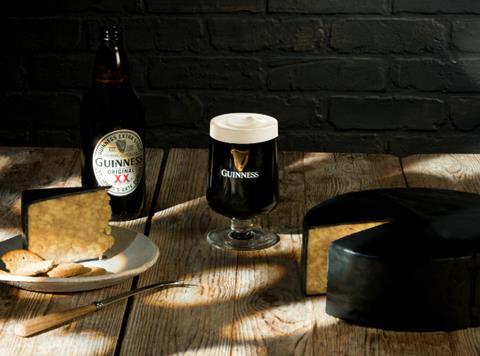 Booze giant Diageo and Windyridge Cheese have announced the launch of the world’s only official Guinness Cheddar to coincide with St Patrick’s Day.

Windyridge secured a three-year licensing deal with Guinness in 2017 to produce the cheese, which is set to become available across the UK and Ireland within the next few weeks.

It would initially go on sale online in 2kg deli truckles as well as 500g and 250g wax-coated SKUs. A smaller limited edition version was also set for launch later in the year, aiming to target the snacking market, Windyridge said.

The Somerset-made cheese was matured to complement the “bold”, “malty” and “full-bodied” taste of the stout infusion.

“The reason we have developed these formats is that we understand that shoppers are looking for convenience, added value and a format that meets the needs for different occasions,” said Windyridge MD Melvin Glynn.

“Enjoying Guinness Cheddar when socialising, at a sporting event, or at home makes this an ideal shopping basket must-have.”

The cheesemaker intended to partner with other Guinness licensees to create value in the market by making consumers aware of the new and different ways to experience the taste of Guinness, added Windyridge commercial director Matthew Glynn.

Guinness’ first venture into cheese is set to target Guinness fans, “cheese connoisseurs” and consumers seeking unique experiences, though it is yet to confirm any major retail listings.

“The flavour profile and product that has been developed by the team at Windyridge is superb, and a real testament to the expertise and passion that has been put into the overall production of Guinness Cheddar,” said senior licensing manager at Diageo Declan Hassett.

“It’s a beautiful pairing to a pint of Guinness, and I really look forward to sharing in its success as it begins its retail rollout.”