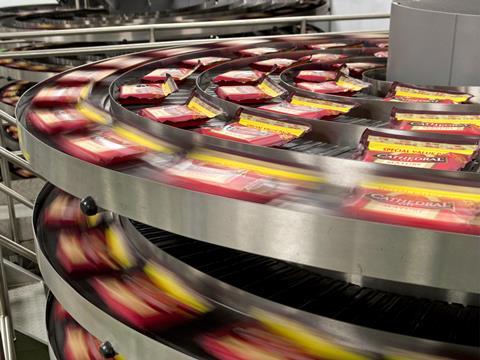 Dairy Crest is to invest £85m in its cheese business in a bid to grow capacity and target new export markets.

Speaking as it announced a 10% rise in sales and 3% increase in pre-tax profit in its annual results today, the Cathedral City owner said it would plough £75m into its Davidstow creamery in Cornwall and invest a further £10m in packaging innovations across the business.

The investment will be funded by the placing of new shares in the business, and would ensure the Davidstow plant would be “future proofed for the next 10-15 years”, said CEO Mark Allen.

Processing capacity will rise by an additional 200 million litres of milk every year, allowing Dairy Crest to increase its annual cheese production capacity from 54,000 tonnes to 77,000 tonnes over the next four to five years.

Whey production at the site, largely used for the global infant formula market, would also grow proportionally. “The site has been very successful since it first opened in 2005, but we are now fast running out of capacity,” Allen said.

The supplier was also working on a new prebiotic drink brand, which would be sold in shorts, while the investment would also allow Dairy Crest to “improve water and energy use as we move towards self-sufficiency”, he added.

It would also be “good news” for its 330 farmers, with Dairy Crest pledging to work closely with them to grow milk volumes.

“We’re currently UK-centric from a cheese perspective with little or no exports, so this also gives us a real opportunity to start selling the brands around the world,” Allen added. “We have been in discussions over the last couple of years with a number of potential partners, and we are confident we can generate a good export income over the next four to six years.”

And despite its new focus on exports, Allen shrugged off concerns over the UK’s post-Brexit trading relationship with the EU.

“We will deal with whatever comes out of that in the normal course of events,” he said. “If you’ve got a great product you find ways of solving those problems, and we’re confident we make great cheese and have strong brands our partners want to work with.”

Clover and Frylight also saw revenues grow, up 7% and 13% respectively. The butters and spreads division saw overall growth, but the supplier admitted it had been a “challenging year” for the Country Life brand, which saw a volume decrease of 20% on flat revenues, primarily as a result of a halt in promotional activity due to rising wholesale butter costs. However, Allen stressed performance had improved since the turn of the year as butter market volatility eased.

Dairy Crest also restated its ambition to switch to 100% recyclable packaging by 2021/22. Some 80% of its packaging is currently recyclable.

But despite news of its investment plans and positive financial results, Allen insisted the business would not welcome any approaches.

“My job is not to search for a suitor. This investment sets up Dairy Crest for the next 10-15 years and, if anything, it should allow us to be more acquisitive.”

News of the investment was given a positive response by investment bank Jefferies. Analyst Martin Deboo said Dairy Crest had a “decent year”, but added it was “regrettable” its balance sheet position hadn’t proved capable of funding its investment “from internal sources”.