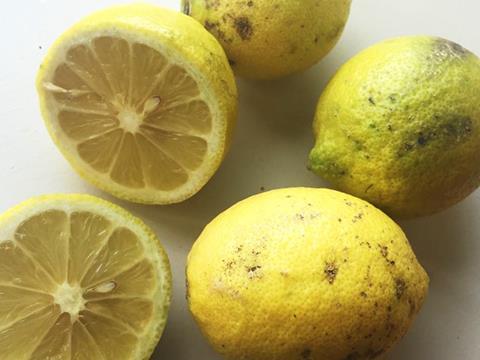 The lemons were deemed “unsuitable to meet retailer specification based on appearance”, said Riverford technical manager Dale Robinson, but will now be included in the company’s seasonal veg boxes.

“The lemons are slightly green in areas, due to not enough difference between night and daytime temperatures, and have a few scars from hail damage,” Robinson said. “We’ve had our team of in-house chefs check them out and inside they are beautiful, ripe, aromatic lemons with plenty of juice and flavour.”

The rejection of the batch was “another example of a crazy food system that has forgotten it is producing food, not kitchen ornaments”, he added.

Unlike the major supermarkets, Riverford did not have strict size and shape criteria to meet, and as a result created far less waste, said founder Guy Watson.

“Our customers love knowing exactly where the food on their plate has come from; we can tell them who grew it, how they grew it, and when it was picked,” he added. “This connection means they enjoy getting unusual shaped veg that has been grown for flavour, not cosmetic perfection, and having the reassurance that our farmers are paid fairly for their produce, even if it is not aesthetically perfect.”