Bananacoin: can a Bitcoin-style scheme work for banana growers? 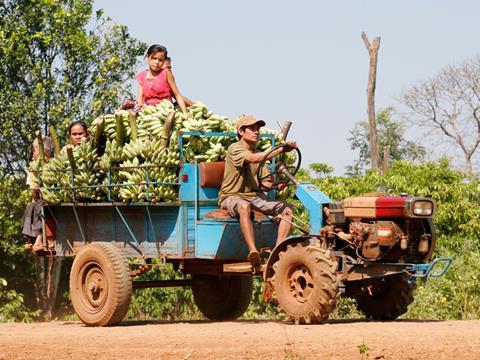 Despite its headline-grabbing name, Bananacoin is better described as a crowdfunding project with a cryptocurrency element bolted on

The world has gone bananas for Bitcoin. The blockchain-based cryptocurrency and rivals such as Ethereum and Ripple have all seen saw their values soar to new records over the past year.

The top six cryptocurrencies currently boast a combined market cap of $400bn - and now the crypto craze is coming to grocery.

Bananacoin is being hailed as “the first eco-friendly” cryptocurrency, linked to the production of organic bananas in Laos.

So how does it work, what’s in it for investors - and what’s the potential for schemes like it to become a credidble, alternative funding model for growers?

Bananacoin is the brainchild of Russian entrepreneurs Oleg Dobrovolsky and Alexander Bychkov, who have been working in Laos’ fledgling banana sector for three years. First grown in the one-party socialist republic in 2005, the fruit is now one of Laos’ primary exports.

The group behind Bananacoin wants to increase production at its plantation from 100ha to 360ha and target the Chinese market, where the ladyfinger banana variety grown in Laos is in high demand. It plans to achieve this by selling Bananacoin tokens to investors using the Ethereum platform, with the value of each token linked to the export price of a kilo of bananas.

Tokens are currently valued at $0.50 each and, at the time of writing, some 3.8 million had been sold out of a total offering of 14 million, with the project’s first harvest due by December.

Once the group has achieved its aim of selling 14 million coins, investors will be able to continue trading the coin on several cryptocurrency exchanges, Dobrovolsky says.

It’s a low-risk investment proposition, he adds. After all, the price of Laotian bananas has never fallen below $1.14/kilo and was as high as $3.00/kilo last February.

But that’s precisely why some experts are sceptical about the attractiveness of Bananacoin.Cryptocurrencies are making headlines precisely because the potential investment upsides are huge. Yet that’s unlikely to be the case with Bananacoin and its exports-based model, suggests Alastair Constance, CEO of foreign exchange trader Mercury FX.

Indeed, even Dobrovolsky accepts that, despite its Bitcoin-style name, Bananacoin is better described as a crowdfunding project that has a cryptocurrency component bolted on rather than a pure-play cryptocurrency.

And despite Bananacoin’s pitch as a relatively low-risk investment, there could be risks, suggests Constance, who says he is concerned by the “vagueness” of the proposals and the lack of a clear return for investors. “I think you’re betting on these guys tripling production and shipping more bananas to make more money and the coin will go up,” he says. “You’re not being offered a share of equity.”

Yet Dobrovolsky insists it’s a safe bet. “Laos doesn’t get hit by hurricanes, all our land is in the hills so the plantation is protected from the risk of floods and disease,” he claims.

Plus, the Bananacoin model could become a blueprint for other growers in developing countries who often struggle to access traditional finance, Dobrovolsky adds.

It’s an idea with some merit, says Fairtrade’s head of innovation Dan Morey. “Emerging tech represents an opportunity for farmers in some of the world’s most deprived areas to find new ways of getting finance and reaching new customers.”

Soil Association Certification’s trade relations manager Lee Holdstock also sees potential - although he, too, stresses Bananacoin is not a cryptocurrency in the usual sense of the word. “Others have observed Bananacoin more closely resembles a commodities derivative investment contract, rebranded as a token,” he says. “Combining this approach with the supply chain traceability of blockchain could be a powerful tool for enabling direct consumer investment in producers.”

Constance agrees, adding the Bananacoin model “has merit” if done properly. “This could work in perishable commodities and products such as rice and grain. Accessing finance is a major hurdle in emerging markets. Tapping capital markets without going to the banks is a huge opportunity.”

But there needs to be absolute clarity “in what you are raising” he warns. “Is it an IOU, a share of the land? What do the farmers get?”

Whether Bananacoin itself will provide compelling enough answers to these questions and ends up selling its 14 million tokens remains to be seen. But cryptocurrencies’ wider potential means we’re likely to see more producers dipping their toes into the crypto market in the months ahead.