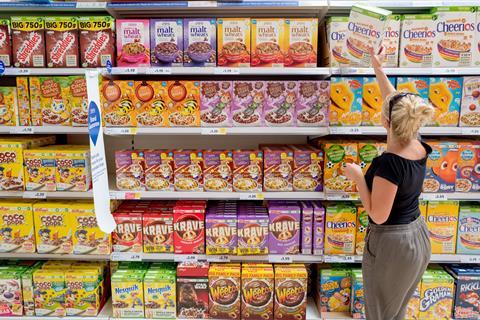 Department of Health sources were today trying to play down reports of plans for a raft of new food taxes, after an “urgent review” was launched to speed up progress in tackling obesity.

In an interview with the BBC, Davies, who is due to stand down later this year, said measures could include new taxes on foods.

“If you provide a healthy product on the supermarket shelves that will come in cheap,” she said.

“If it’s unhealthy there’s a levy on top of it, which is equivalent to a tax, so parents are then nudged to buy the healthy version because it’s cheaper and they can see it’s healthy.”

However, amid subsequent reports that the government was looking at taxes on products including breakfast cereals, chicken nuggets and ice cream, the DH was back-pedalling today.

“The comments from Dame Sally came when she was pressed by an interviewer and pushed into a corner about taxes,” said a source. “Yesterday’s announcement was supposed to be about opening up talks with all parties, including industry, to try to think outside of the box about how to tackle obesity.

“Reports about taxes have very much been exaggerated in the coverage.”

PHE forced to move the goalposts for OOH sugar reduction

The fact that the review had been ordered by the health secretary had outraged industry figures, who claimed they had not been given enough time to make reformulation work and said it called into question his “non-interventionist” credentials. The developments come with Hancock among a long list of candidates standing to become the next Tory leader, having billed himself as a “pro-businesses” candidate. He has attacked rival candidate Boris Johnson over his infamous “f*** business” comment.

Hancock said: “We have already gone further than any other country to reduce childhood obesity. Our reformulation programmes are world-leading. Children up and down the country are running a mile a day thanks to our work with primary schools, and we are consulting on a number of new laws on advertising and promotions to make the environment healthier for our children.

“I have no doubt that these policies will be effective. What I do not underestimate is the scale of the problem we face and we should not rest on our laurels. By 2030, if we want to see a real improvement to our children’s health we are going to have to use every tool in our arsenal, so today I have asked the chief medical officer to report back on what else we can take forward.”

Meanwhile the CMO, who is due to step down from her role later this year, said she regretted that other measures to tackle obesity, including PHE’s voluntary reformulation programme, were “taking so long”.

“We would therefore welcome any additional resource that is put into tackling it. Obesity is a complex issue - it is important that all key players are involved and that they all have an equal voice.

“However, we will only support evidence-based policy that is proven to be effective. Calls for headline-chasing measures that affect all consumers must be resisted, and money should be put behind specific, targeted measures for those people and areas most affected by obesity.

“Our members are already working on a range of interventions that have already been placed on the food industry. We need time for this to work and see what makes a difference, before anything additional is implemented.”