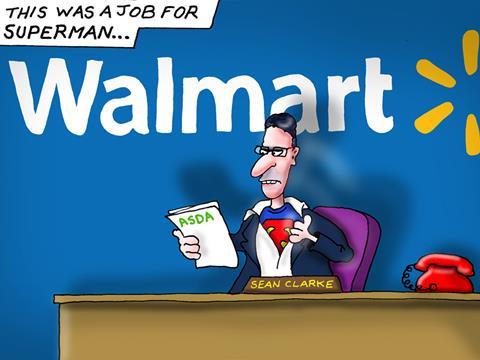 As Shakespeare once wrote: “There is a tide in the affairs of men which, taken at the flood, leads on to fortune. Omitted, all the voyage of their life is bound in shallows and in miseries.”

What he omitted to say is how fickle and deceptive the high tide can be. What looks like a momentous decision can turn out to be momentous only in the sense that it leads on to… disaster.

So it has proved at Asda. CEO Andy Clarke was pootling along quite nicely. He wasn’t ripping up trees. But Asda was surviving the discounter onslaught better than its rivals. It was Britain’s Favourite Supermarket for four consecutive years. Then came his disastrous Five Year Strategic Plan. With the help of McKinsey, Clarke took the decision to write a business plan that stripped out hundreds of millions in costs - and instead of taking on the discounters and passing it on to the customers, as he had promised, he delivered the savings into the pockets of his shareholders.

How it must have stuck in the craw of sacked and demoted store staff - colleagues whose goodwill Clarke had engendered over several distinguished years of service - when Asda’s profits reached a new high water mark in 2014 of £1bn. And as rivals plunged into the red Clarke boasted of Asda’s continuing profitability. But customers didn’t buy it, and have voted with their feet. And the decision to protect profits and margins, in the heat of a price war, has landed Asda in shallows and miseries, as our analysis of Asda’s deteriorating service and availability in The Grocer 33 makes plain.

To be fair Clarke is not the first boss to make this mistake. Ex-Morrisons CEO Dalton Philips made a similar call when profits passed the £900m mark in 2009. “Let’s go for the billion,” he urged his boardroom colleagues. It turned out in hindsight to be the wrong call - although there were some in the room who predicted it at the time (and lost their jobs for saying so).

A similar loss of foresight (and perspective) clearly preceded Tesco’s implosion. Instead of doing what’s right for its customers, which it had always insisted was its north pole, it became a slave to its shareholders.

One can also see how this mistake has been made on the supplier side. When Aldi introduced its award-winning Mamia range it laid down the gauntlet to branded suppliers such as P&G and Kimberly-Clark. How P&G must have rubbed its hands with glee when, as pressure was applied, Huggies pulled out of the nappy market. One suspects there was one of those billion-dollar-style moments in the P&G boardroom. Instead, Aldi’s tanks have done real damage, and the momentum has not only helped Aldi win The Grocer of the Year for the third time in four years, there’s more still to come.

In the meantime, towing a marooned Asda back to safer waters is going to be extremely challenging for all concerned. But there’s a new Clarke (Sean, not Kent) in charge. And Roger Burnley, even if these affairs have bruised his ego, can come in very handy. It was Roger who really delivered for Sainsbury’s its award-winning service and availability. He can do so again for Asda - although in order to do so one suspects Walmart may not reach its billion-pound higher water mark again for some considerable time.