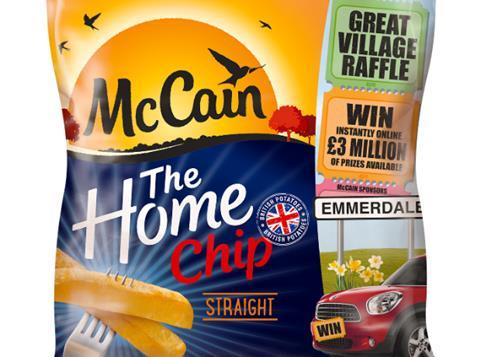 McCain is highlighting its sponsorship of Emmerdale with Great Village Raffle, an on-pack promotion across 42 SKUs.

The instant-win push will give away more 25,000 prizes inspired by the 44-year-old TV soap, with a total prize fund of £3m. Ten Mini Countryman cars are up for grabs, as well as Emmerdale set tours, acting masterclasses, country spa retreats, and gastro pub dinners.

To be in with a chance of winning, shoppers must buy one of 45 million McCain promotional packs and enter the unique code on Greatvillageraffle.co.uk.

Rolling out now for three months, the activity will be supported by print, social media and digital activity. It marked the frozen food brand’s most significant on-pack investment “for many years”, said McCain marketing director Mark Hodge.

“We wanted a fun, engaging shopper promotion that would celebrate our sponsorship of Emmerdale,” he added. “What better way to do that than by holding a traditional village raffle with prizes inspired by the soap?”