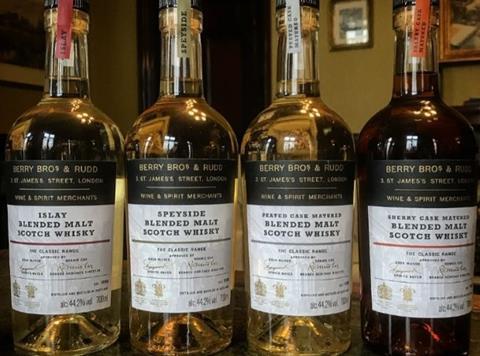 The lineup consists of Islay, Speyside, Peated Cask and Sherry Cask variants (44.2% abv). It brings Berry Bros & Rudd’s Classic selection of spirits to five SKUs, the retailer having relaunched its London Dry Gin last month after a four-year hia-tus. The new whiskies are priced at £32/70cl.

Berry Bros & Rudd said it had sought to “create an accessible and perfectly-balanced dram”, with its spirits buyer Doug McIvor and brands heritage director Ronnie Cox hand-blending the drinks themselves.

They had looked for “balance and complexity, maturity and texture” in the process, said McIvor. “Equally, age is not king. Maturity counts for much more.”

Berry Bros & Rudd hinted at further NPD to come. It had “the intention of expansion as different flavours and finishes are required” the business said.

The latest launch comes after Berry Bros & Rudd won UK distribution earlier his months for US whiskey brand Old Potrero, which is available now from its St James Street store and to the on-trade via its distribution wing, Fields, Morris & Verdin.