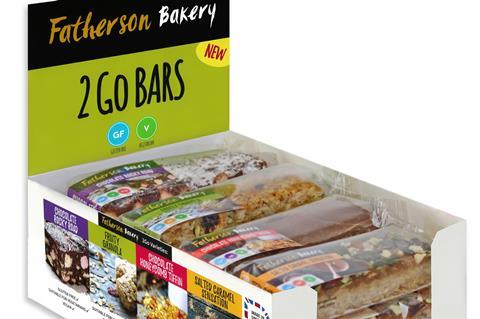 Fatherson Bakery has launched a range of gluten-free snack bars – marking the artisanal brand’s debut in both free-from and on the go.

The four-strong 2Go lineup is available from today (26 March) in grocers including Co-op, Londis, Nisa and Budgens, as the first NPD in Fatherson’s two-year development programme by its new owners.

The Warwickshire-based Fatherson, which supplies more than 1,500 UK outlets, is also planning to add gluten-free versions of established hand-made products across its portfolio of premium cakes, fruit pies, sponge pudding, tray bakes and buns. And it is set to replace its colourless plastic wrapping with a plant-based cellulose within the next six months – with no change to shelf life or rsps.

Fatherson’s next launch will be a four-pack of mini Victoria sponges in May.

The changes come in a bid to revitalise the 12-year-old brand, following its sale in January by the founding Geary family to former Unilever and United Biscuits executive Laurence Smith, his wife Megan Smith, and their business partner Mark Lewis.

While Fatherson’s annual sales amounted to around £4m, the business was acquired for less, said Laurence Smith. The original owners, two brothers and their two sons, had taken the brand “to where they could get to, and the fathers were looking to retire”.

They wanted to sell “but only to the right buyer. They weren’t looking to sell to another baker to be asset-stripped.”