Has Coke’s new trio got the A to Z of successful NPD? 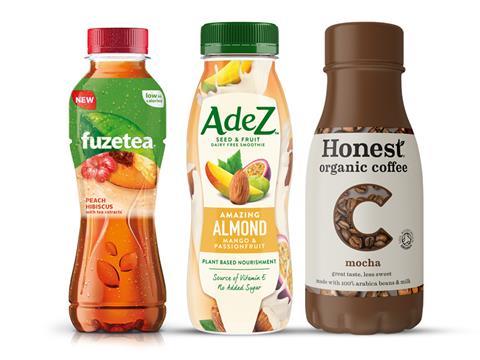 Good omens and catastrophes both have a tendency to come in threes, the superstition goes. Having announced three big launches for the first quarter of 2018, Coca-Cola European Partners is hoping the former will ring true.

In its quest to diversify its portfolio away from carbonates, the fmcg behemoth has launched Fuze Tea, a low-calorie ice tea; Honest Coffee, an extension of the Honest Tea range; and AdeZ, a range of vegan-friendly dairy alternative smoothies. And it has set some pretty ambitious targets: it wants half its growth to come from NPD by 2020.

So why is Coke so keen to expand its reach in still drinks? And are its new contenders up to the challenge?

CCEP’s carbonates face an uncertain future. Fanta and Coca-Cola Zero Sugar are flying off the shelves, but Coke Classic and Diet Coke are in decline as shoppers look for healthier alternatives. Then there’s the sugar tax: Coke would have owed the taxman more than £120m in 2017 if the half a billion or so litres of Classic Coke sold in supermarkets had been subject to the levy [Nielsen 52 w/e 9 September 2017].

So it’s easy to see why CCEP is looking for growth elsewhere. “Consumer preferences are changing. The way that we live and work is changing. We need to change our portfolio along with our consumers and offer more choice,” says CCEP customer marketing director Simon Harrison.

Fuze Tea, currently in some 52 global markets, is perhaps Coke’s safest bet. “On-the-go tea is a solid proposition,” says HRA Food & Drink MD Hamish Renton. “If the price point is right and they get decent distribution it will do very nicely.”

But while it taps the health trend with its low-calorie messaging and sustainability credentials – its extracts come from 100% sustainably sourced leaves – Fuze may fail to generate genuine excitement when ranged next to the likes of kombucha teas and kefir. “If you’re as big as CCEP and you have shareholders, staying at the top of the charts is as good as it gets, which brings a bit of conservatism to the industry,” says Renton. “So it feels like they’ve done their homework but it’s not the game-changer they perhaps need.”

Honest Coffee, meanwhile, is a more exciting prospect. Coke has a wealth of experience in cold coffees worldwide – it sells them in 28 countries, and claims to be the biggest global player in value terms. But this is the first organic variant in its arsenal, and comes as the British RTD coffee market booming, with sales up c.20% to £66m, according to CCEP.

The rollout has been carefully planned, with the first two SKUs, Latte and Mocha, set to launch first in workplaces with contract caterers, coffee and sandwich shops, and selected high street retailers.

“We’re following the consumer rather than going for mass-market distribution,” says Harrison. “We’re convinced it has the potential but we want to make sure that we recruit brand advocates before we scale.”

AdeZ is the wildcard. The Latin-American brand was originally launched by Unilever in the UK as a soy and fruit juice blend in 2006. Unilever spent millions on promoting it, but it was pulled from shelves in 2008.

The problem, sources claim, was the taste. Initial purchases were strong, but it failed to gain repeat traction alongside shelfmates like Tropicana and other juices. It is understood Unilever attempted to reposition the brand to tap consumers looking for lactose-free drinks but couldn’t make it work.

CCEP’s AdeZ, while carrying the same brand name, is a different beast entirely. There’s not a hint of soy: its three 250ml SKUs use trendy coconut milk, oat milk and almond milk as bases. And while sales of dairy alternatives may have been negligible back in 2006, the category is now booming.

Alpro dominates the mults’ dairy alternative aisles, but it hasn’t quite nailed the on-the-go market, to which c-stores contribute a disproportionate amount of sales, says Renton, leaving a tempting gap for CCEP to fill. “On-the-go is where Coke is very strong. I imagine they are looking to do Alpro’s job there,” he adds.

CCEP maintains AdeZ has no direct competitors because it sits between dairy alternatives, juices and smoothies. “A lot of the other dairy alternatives out there are for pouring. This isn’t that kind of product. It’s a bit of a white space for us, but also for our customers,” says Harrison.

However, while AdeZ has “huge potential”, it may have misfired on its messaging, if the feedback from branding and packaging specialists is anything to go by. The name doesn’t scan, the pack design is old-fashioned and reminiscent of the laundry or personal care categories, variants like “Courageous Coconut” are clunky and messaging around “seed & fruit” is potentially confusing, they say.

“I’m unsure who the target market is,” says Neil Shackleton at Medoola. “It doesn’t really tick any boxes while trying to cover all of them.” Crucially, an organic-looking pack would have worked better than plastic in the current climate, he adds.

Regardless, AdeZ and its fellow launches are a statement of intent from Coke, signalling a desire to build greater credence outside carbonates,

And with hefty goals in its crosshairs for 2020, and famously deep pockets, rivals shouldn’t write off this trio of launches any time soon.