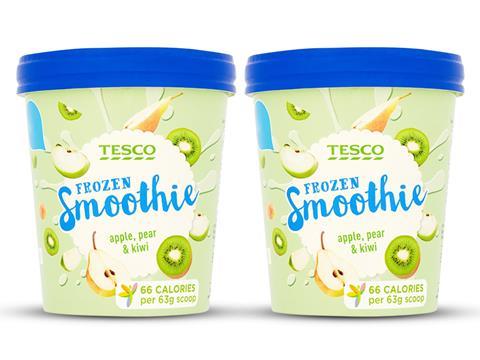 Why: Ice cream was up £31.7m in values sales in 2016 as Brits attempted to cool off during a raft of heatwaves [Nielsen 52 w/e 8 October 2016]. In the tubs subcategory, brands were the winner as they satisfied demand for indulgent variants. Own label, meanwhile, was frozen out of such success, seeing year-on-year sales run more or less steady. This Tesco sharing option is part of a range that includes Strawberry, Mango & Banana, and Strawberry, Raspberry & Blackcurrant variants.

Consumer verdict: Though some of our triallists considered the flavour combination unusual pre-trial, they found it “fresh” and “fruity” with a “smooth, creamy” consistency and a “pleasant aftertaste”. Older shoppers in the North were impressed by the product the most. More than 30% of respondents said that they would “definitely” buy the Tesco product, which was also praised for its value for money and “bright, summery” packaging, scoring three points above the category norm.