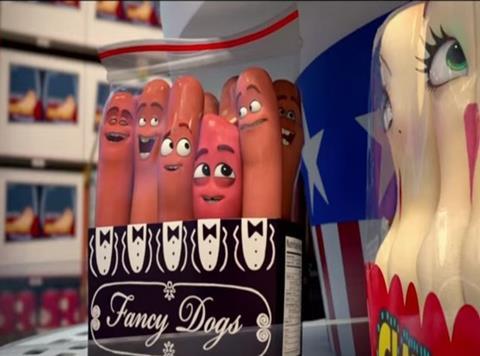 The supermarket aisle. More likely to ooze bacon juice than Hollywood glamour. And yet in Sausage Party (on general release now) some of Tinseltown’s biggest stars have given the weekly shop an all-singing, all-dancing makeover.

Beer bottles party in the liquor aisle, corn on the cob trills a tune and baby carrots chuckle in their bag. All are convinced being picked by the ‘Gods’ (shoppers) mean they’re heading for the ‘Great Beyond’ where pitta breads can bathe in endless olive oil and Frank the Frankfurter can finally be with Brenda the Bun.

But don’t be fooled by the PG premise. Even creator Seth Rogen has gone on record as saying he “can’t believe what we got away with” in a film that goes out of its way to shock.

And that isn’t even taking into account what goes on outside the supermarket, where Barry the sausage learns the terrible truth, barely escaping a meat cleaver after seeing a potato skinned alive and the eyes of a cabbage poked out.

If supermarket CEOs had got their hopes up that this Hollywood take on grocery would cast them in a warm glow (or at least offer lucrative licensing deals) they’ll be disappointed. After 90 minutes of Sausage Party I’ll never look at food in the same way again.