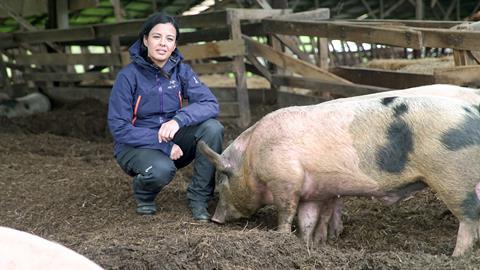 “Should we just stop eating meat?” That was the stark question asked by TV presenter and scientist Liz Bonnin last night as she investigated the environmental impact of global livestock farming in her documentary Meat: A Threat to Our Planet?.

The hour-long BBC programme – which saw an increasingly crestfallen Bonnin criss-crossing the globe to experience the scale of industrial livestock production first hand – certainly made for uncomfortable viewing.

Citing the findings of high-profile reports from the IPCC and the WHO linking global agriculture to climate change, Bonnin travelled from Texan beef megafarms to giant pig farms in South Carolina which produce colossal quantities of polluting manure.

She then flew over the Amazon to see the damage wrought by deforestation for vast cattle ranches, before heading to South Africa to see how the fish feeding grounds of penguins were being devastated by the fishmeal sector.

By the end of the odyssey, Bonnin had clearly made up her own mind on the big meat question. Indeed, she declared she had already cut red meat from her diet -  though she didn’t mention whether or not she still ate poultry, which is largely fed on soy (another big driver of Amazon deforestation).

But given the serious message she was trying to deliver (which came on the same day scientists warned carbon dioxide and other greenhouse gases reached new highs in 2018), I can’t help but feel it further muddied the waters over the causes of climate change and what can be done to address it.

Not least because - as the meat sector was quick to point out - Bonnin’s globe-trotting trip most likely generated a significant carbon footprint. One estimate on social media put her own carbon footprint for the film at an estimated 55 tonnes of CO2 from more than 24,000 miles of travel.

The lack of balance and nuance was even more disappointing.

The images in the film were undboutedly shocking. But Bonnin failed to point out that the UK actually sources very little meat from Brazil or the US.

As the NFU was quick to point out today, the UK’s largely grass-fed beef herd has a greenhouse gas footprint 2.5 times lower than the global average. According to AHDB, UK agriculture emits less carbon than transport, energy, business and even homes.

Bonnin’s documentary paid no attention to the UK farming sector’s comparatively higher sustainability credentials, instead presenting the lower standards seen in the US and Brazil as the same homogenous standard used globally.

NFU vice president Stuart Roberts described the documentary as “the best advert” for the UK’s sustainable production systems. It also illustrated why the UK should think carefully about pursuing trade deals with countries working to lower environmental standards, he added.

However, getting that message over to an increasingly concerned public looks like it just got a lot harder.

‘Planetary health diet’ sparks strong reactions… but will we change what we eat?