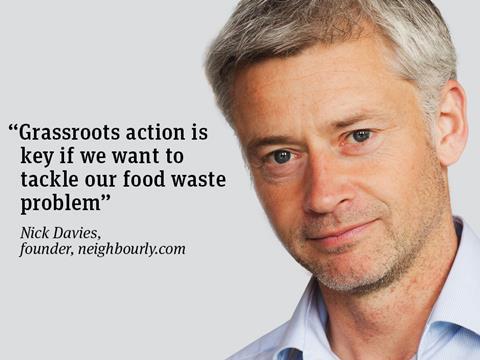 One might expect the driving force behind France’s new food waste law to be satisfied, with the Bill being passed unanimously last month. But Arash Derambarsh, the local councillor who spearheaded the campaign, is not stopping there. “The ball is now in the court of the Commission president, Jean-Claude Juncker, and European leaders. They have a responsibility before history and before the 500 million people of Europe,” Derambarsh said after the vote.

Strong words, but an unprecedented groundswell of public opinion means developments in France are almost certain to be replicated across Europe. The UK’s own proposed Food Waste (Reduction) Bill will be discussed by the House of Commons on 4 March, and is certain to have drawn oxygen from developments across the channel. This is bigger than a political point-scoring issue - the bill has been drafted by MPs from across parties. The food industry knows it, and many actors are exploring ambitious expressions of proactivity in advance of potential new legislation.

One such initiative is Champions 12.3, launched in January as a collaboration of 30 executives and ministers united in their dedication to meeting target 12.3 of the UN’s Sustainable Development Goals. This is an excellent initiative from signatories including Tesco, Unilever and Nestlé - the sort of purposeful leadership that society expects in 2016. But ambition must quickly be followed by action because food waste is a highly visible, emotional issue. Rarely have consumers been so demanding of business to change, and the window of opportunity to ‘win’ on food surplus is closing fast.

Can supermarkets really turn a war on waste into a win? Clearly they must move quickly to deal with the 250,000 tonnes of food left out for the binmen at the back-of-store every year. But There is genuine opportunity for those who choose not just to fix the problem but go further - to create enduring solutions that empower all of business and society.Digital redistribution platforms are springing up and these create capacity, but this is worthless unless met by grassroots action - waste will simply move from store to community. If supermarkets are to create lasting change and ensure more surplus food makes it to the mouths of the hungry, retailers have to empower local people to help out in the final mile.

They already are, of course. As we might expect, the Great British public are more than willing to help providing they know exactly how, where and when they are needed. Neighbourly Food (our own food re-distribution platform) began distributing Marks & Spencer surplus food in November last year, by inviting local people to get involved in specific ways. More than 100 stores have already donated surplus food, feeding upwards of 53,000 people - and that’s just the start. It’s a fantastic result and testament to M&S’ forward-thinking approach to sustainability.

Quite simply, we ask people to tell us where food is needed and then to come and collect it.

My team could probably find the soup kitchens, homeless outreach programmes and food banks without their help. But only local people know about the independent community cafés, day centres, housing associations, rehabilitation centres, cookery classes, children’s clubs and welfare support groups that do brilliant things with surplus food. And when these local people offer to collect, the logistical challenges of distribution are removed - meaning more food to more deserving people.

More food is important, but people-power can create a step-change in the nutritional value of that food too.Current systems struggle to provide fresh or chilled produce to community groups at scale. But local people are more than capable of following food hygiene rules - and, crucially, they’re highly motivated to do so when it comes to doing their bit to help others.

This is the real future of food surplus distribution - the ambition and leadership of big business met by the enthusiasm of a citizen-centred movement of ordinary people who understand how good it feels to ‘be neighbourly’ and offer a few hours’ spare time.

Food surplus legislation clearly has momentum, and UK operators should explore solutions now to be ready for compliance as a minimum. But any organisation targeting compliance should be aware that a handful of forward-thinking brands will welcome new laws for the level playing field they provide. These brands are ambitious to push still further into potentially game-changing partnerships that achieve impact beyond their legal obligations. As the battle against food waste continues, brilliant innovation won’t be lost on customers - this is a fantastic opportunity we simply must take.

Nick Davies is founder of Neighbourly.com