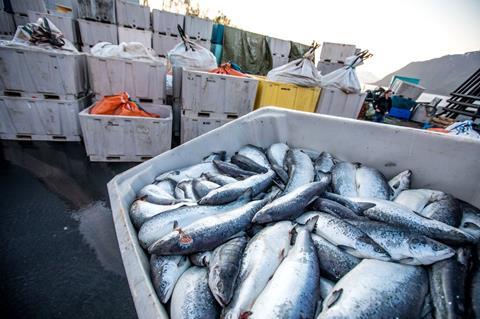 Some 7.8 million, or more than 13,000 tonnes of fish have been reported killed or discarded as a result of the bloom

Norwegian salmon prices jumped by 8% in just one week last month and are expected to continue climbing after an algal bloom killed millions of farmed fish.

At the time of going to press, some 7.8 million, or more than 13,000 tonnes of fish had been reported killed or discarded as a result of the bloom in Norway’s Nordland and Troms regions. A further 2.5 million fish had been moved away from the outbreak, said the Norwegian Directorate of Fisheries.

Harmful blooms of the chrysochromulina leadbeateri first emerged in early May.

The species of algae is common in Norwegian waters. However, a combination of warm weather and calm waters led to a surge in numbers, said the Norwegian Institute of Marine Research, placing farmed fish - which are unable to escape the bloom - at risk.

The presence of the bloom led the price per kg for Norwegian salmon to rise from £5.19 to £5.60 from 8 May to 15 May [Mintec], by which time the Norwegian Directorate of Fisheries was warning of worsening conditions on its coastline and soaring mortality rates.

At the latest prices, the cost to the Norwegian salmon sector of the outbreak is more than £72m. Norwegian Seafood Council analyst Paul Aandahl warned the amount of fish lost could rise as high as 40,000 tonnes.

The full impact of the bloom was yet to be realised, said Mintec analyst Alana Ribeiro. “Anticipations are for prices to follow a similar trend to what happened in 2016,” she added, when the Norwegian market was badly affected by a sea lice outbreak.

This led to sharp price hikes for two months, before they fell steeply, she said.

“This could potentially encourage farmers to start the early harvesting of salmon with the aim to save fish, overfilling the market with supply and thus pushing prices down.”