The Dairymen digital special: Do Brits think dairy is scary?

Dairy is under attack. What do Brits actually think about dairy? Are they on the brink of an exodus? And how can the industry convince them to keep buying into the category? 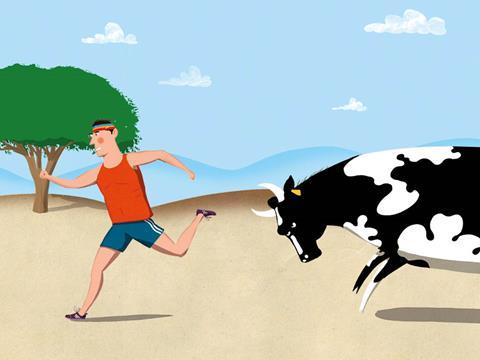 Dairy is under attack. The vegan lobby has ramped up its campaigns against the industry over the past 12 months, culminating in Viva! this week launching a provocative bus advert campaign accusing the industry of “continual exploitation” and claiming the natural hormones in milk are linked to cancer. At the same time, sales of dairy alternatives are thriving, with Tesco and Sainsbury’s launching new dedicated dairy-free fixtures to take advantage of booming consumer demand for plant-based products.

So what do Brits actually think about dairy? Are they on the brink of an exodus? And how can the industry convince them to keep buying into the category? To mark The Dairymen 2017, published this Saturday (16 September), we commissioned exclusive consumer research from Harris Interactive to find out the truth behind attitudes to dairy.

Video: Why are people ditching dairy?

Brits aren’t planning to ditch dairy altogether just yet, according to our survey of over 1,000 shoppers in the UK. Just 5% say they have already switched to a dairy-free diet, while 8% are considering making the move.

“There is a clear age gap in attitudes towards dairy with younger ages either most likely to have cut down dairy intake or be planning to do so,” says Lucia Juliano,  head of CPG & retail research at Harris Interactive. “The over-45s are much more resistant to recent dietary trends against dairy consumption and this group remain loyal consumers.” 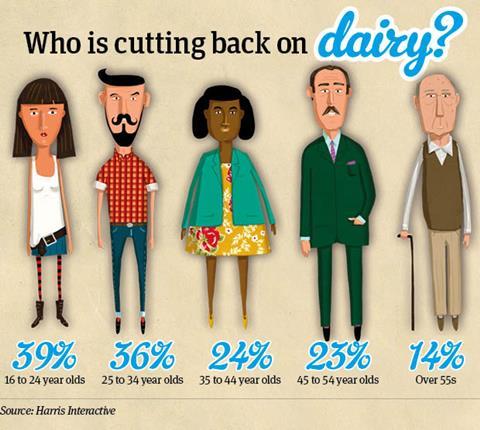 This rise in a “flexitarian” approach to dairy consumption is already driving booming demand for plant-based alternatives. While total spend on dairy has remained fairly stagnant over the past five years, up by just 0.6% to £12.3bn (52 w/e 13 August 2017), spend on dairy alternatives has more than doubled over the same time period, from £209.4m to £422.7m.

“The dairy-free market’s share of total dairy has increased from 1.7% to 3.4% over the past five years as its value grows strongly. This is as more shoppers enter the market, as now over one in three shoppers buy into dairy-free,” says Annabelle Gough, client manager at Kantar Worldpanel.

“Coconut variants are still driving growth, seeing 42.5% value growth over the latest 52 weeks, but oats and nuts are also contributing, growing by 49.7% and 22.0% respectively. The heartland of free-from, soya, is also growing further (+11.3%), despite already accounting for over a third of free-from sales.” 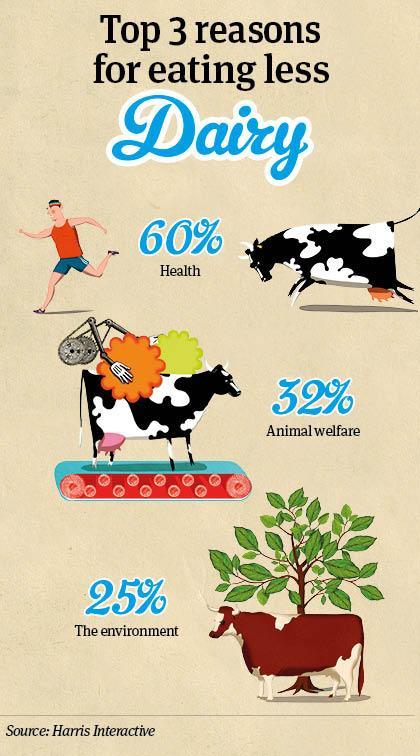 The motivations for eating less dairy are clear – with health, animal welfare and the environment the top three cited reasons for people cutting back. Health concerns are more than twice as likely as likely to put people off eating dairy as animal welfare and the environment (see left) although there are some variations among the different age groups.

Health was a driver to cut back on dairy for almost one in seven (69%) shoppers aged 45 to 54, for example, but just 44% of 16 to 24-year-olds, with the younger generation also very concerned about animal welfare (42%) and the environmental impact of dairy farming (35%).

“While health is the major driver, it is clear that among younger people animal and environmental factors are just as motivating in driving people away from dairy,” says Juliano.

There is also a noticeable generation gap when it comes to the nutritional value of cows milk vs dairy alternatives like soya, coconut, almond and rice.

When asked to rank different types of ‘milk’ according to their healthiness, the majority (44%) of over 55-year-olds rank cows milk as the healthiest, but the majority of 16 to 24-year-olds (39%) rate it as the least healthy.

“Traditional cows milk is quite polarising, with almost as many people saying it is the least healthy as say it is the most healthy,” says Juliano.

“It is also clear consumers don’t really have a good grasp of the nutritional content of these different milk alternatives and are easily persuaded by health messages communicated by various products and brands – it suggests simple food labelling isn’t being read for these products and that the overarching marketing messages are the main drivers of consumer perceptions.”

Dairy and health: What are people worried about?

With one in five Brits now claiming to be intolerant or allergic to cows milk, according to FSA figures, it would be easy to assume that allergies and intolerances are the biggest health reason for people to cut back on dairy. But when quizzed on their biggest worries about dairy, only 9% of shoppers mention allergies and just 15% say intolerances were a concern. 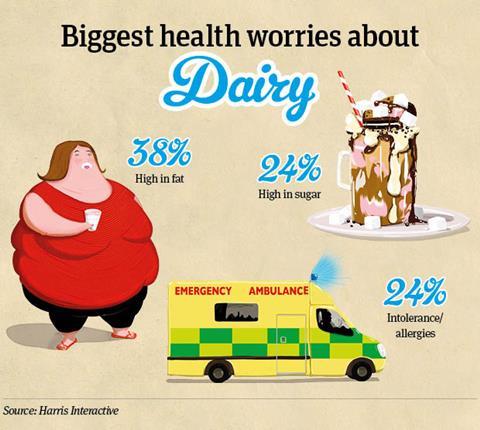 With one in five Brits now claiming to be intolerant or allergic to cows milk, according to FSA figures, it would be easy to assume that allergies and intolerances are the biggest health reason for people to cut back on dairy. But when quizzed on their biggest worries about dairy, only 9% of shoppers mention allergies and just 15% say intolerances are a concern.

In contrast, over a third of Brits (38%) are worried dairy products are high in fat, with almost a quarter of worried they are too high in sugar (24%). Younger generations were most likely to worry about their waistlines, with over two-thirds of 16 to 24-year-olds saying they are worried that eating dairy products would make them put on weight (37%).

Interestingly, while fat content remains a big worry for over a third of shoppers, the latest sales data suggests Brits are increasingly migrating back towards full-fat products when they do buy dairy.

This trend has been particularly noticeable in fresh milk, where whole milk has grown its value share of the market by 0.6ppts while skimmed has seen its value share fall 0.8ppts [Kantar Worldpanel 52 w/e 13 August 2017]. “This is due to semi-skimmed and skimmed shoppers switching their purchasing directly to whole,” says Gough.

A similar thing is happening in BSM - where block butter has gained share (2.8ppts) of the market over the past 12 months, while dairy spreads (-7.7ppts) and low fat (-0.7ppts) have lost share. In yoghurts, low-fat options are losing market share (-1ppt) while higher fat Greek and Greek-style yoghurts are gaining share (+0.6ppts) [Kantar Worldpanel].

Lower fat dairy variants are also losing market penetration, suggesting people are either embracing dairy in all its natural full-fat glory, or are abandoning the category altogether in search of “healthier” dairy alternatives.

What would convince Brits to buy more dairy?

With shoppers increasingly polarised when it comes to perceptions around dairy and health, there is no clear-cut answer as to what would convince Brits to buy more dairy. Around a third still insist more low-fat options would convince them to indulge more often (31%), while 22% want to see more low-sugar options and 24% would buy more if there was a greater range of “natural” unprocessed products.

Opinions are also divided when it comes to animal welfare, our research suggests, despite recent efforts by vegan campaigners to convince Brits dairy farming is cruel. Around 42% of shoppers agree there is nothing to worry about as long as you buy British, but a bigger group (47%) think free-range is fine but intensive dairy farming is cruel.

Less than 10% say dairy farming shouldn’t be allowed at all, although that rises to a fifth of 25 to 34-year-olds (21%). “The industry now needs to develop messages not just about health but about farming, provenance and ‘naturalness’ of dairy products,” adds Juliano.

The industry has already been making moves in this direction, of course, with free-range and farmer-friendly milks hitting supermarket shelves in recent years. People are willing to pay a premium for these products, our research suggests, with almost one in four shoppers saying they would stump up extra for milk that gives more to farmers or free-range milk, while over a quarter would pay extra for organic.

Indeed, despite negative portrayals by vegan campaigners, support for British farmers remains high, with over half (53%) of shoppers agreeing that “supermarkets should pay dairy farmers more and take less profit”, while 21% believe we should “all pay more for our milk and cheese to support British farmers”. As Luciano says: “The British love of the dairy farmer continues.” 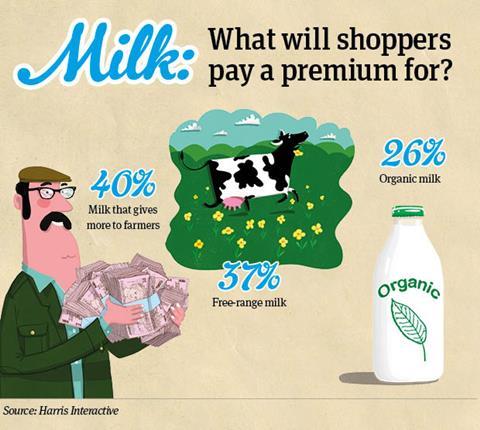 Harris Interactive , a full-service digital consultative custom market research agency, polled more than 1,000 consumers for The Grocer for this article.

With its 30,000-strong consumer panel, Kantar Worldpanel , is a leading consumer and shopper insights provider. Kantar provided sales and usage data and analysis for this article.