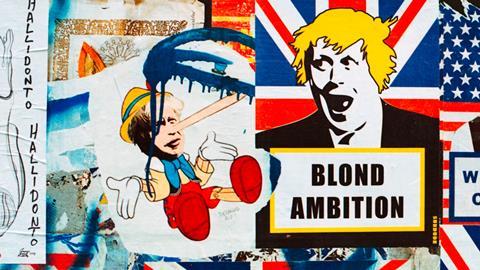 Brexit uncertainty is behind us! Oh no it isn’t..

After three-and-a-half years of uncertainty, Brits could finally go about their Christmas preparations secure in the knowledge the government was stepping up work to make 2020 a year of prosperity and growth, he assured.

The markets seemingly agreed. As the exit poll predicted a big Conservative majority, the pound surged over 3% against the dollar on Friday to $1.35, a 19-month high, and supermarket stocks soared at the prospect of Christmas no longer being constrained by the political impasse.

The food industry, too, was reassured by the prospect of a government with a clear majority in parliament to set the agenda.

Finally, we cried, as a nation, Brexit is behind us!

Because in the latest act of his ‘Get Brexit Done’ pantomime, Johnson has put the possibility of a no-deal back on the table.

He is planning, it emerged yesterday, to outlaw any extension to the Brexit transition period. Which means if a UK-EU trade agreement is not in place by December 2020, we’ll tumble off the cliff edge.

The government insists it’s possible to secure a comprehensive deal by then, but EU leaders and trade experts in the UK and internationally are not so sure.

Either way, it means more uncertainty ahead in 2020. And the pound has slumped accordingly, wiping out any election gains.

That’s bad news for food and drink suppliers and retailers, who were no doubt hoping the post-election surge in sterling would boost consumer confidence ahead of Christmas and ease ingredient prices in the new year.

It’s bad news for Brits, too, who are already paying significantly more for some foods than last year – including chocolate (+4.3%), pasta and couscous (+17.7%), and fruit and vegetable juices (+8.9%), according to the ONS November inflation report.

While overall consumer price inflation remained at a three-year low of 1.5% in November, food and non-alcoholic beverage prices have risen 2.1%, it found.

Pricier festive chocolate is just one example of the pain Brexit uncertainty has already inflicted on Britain. Sadly, it seems even a clear Tory majority won’t heal those wounds.

Indeed, while no time is being wasted, with plans for a pre-Christmas vote on Johnson’s withdrawal deal, the likelihood is that next July we will either get a bad deal (boo), or no deal at all (boo). Unless Boris & Co can pull a genie out of a bottle.