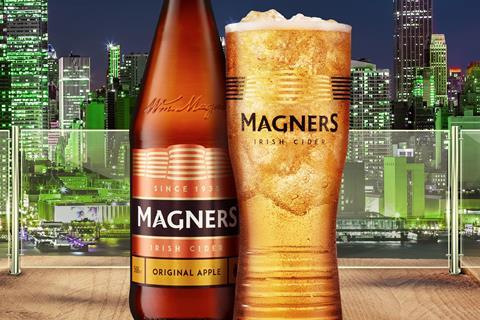 Shares in Magners cidermaker C&C Group were boosted on Thursday by the news of brewing heavyweight David Forde’s appointment as CEO.

Forde, currently Heineken’s UK MD, will join the FTSE 250 brewer and wholesaler “no later than early 2021”. The Ireland-based business has been searching for a CEO since the abrupt retirement of former boss Stephen Glancey in January.

Current interim executive chairman Stewart Gilliland will continue in his role until early 2021, when he will revert to a non-exec chairman role.

In early June the group said the coronavirus crisis had resulted in a sharp drop in sales volumes of key brands, with Bulmers down 16%, Tennent’s in Scotland down 42% and Magners in Great Britain down 7% during the lockdown.

It also said its underlying cash burn was €7m per month while the on-trade remained closed (net of furlough support). It faced “a challenge of unprecedented scale and uncertainty for our industry and supply partners”, said Gilliland.

Nonetheless, it was able to reallocate resources to capitalise on increased off-trade consumption, strengthen its balance sheet and execute a range of cost-cutting measures, including executive wage cuts and furloughing 70% of its staff.

Broker Shore Capital said on Thursday the new CEO and CFO appointments were “a strong endorsement” of the group.

“Although a tumultuous period, Mr Forde is joining C&C at an exciting time,” the broker said. “Supported by its fabric brands, strong balance sheet and market-leading distribution capabilities, we see the opportunity for C&C to broaden its brand portfolio and gain share in distribution,, which over time should lead to incremental earnings and a re-rating towards its beverage peers.”

C&C’s wholesale arm grew like-for-like sales by 1.2% in the year to 29 February before the coronavirus outbreak hit the UK, with Matthew Clark posting an operating margin of 2.9% and Bibendum breaking even for the first time since its acquisition.