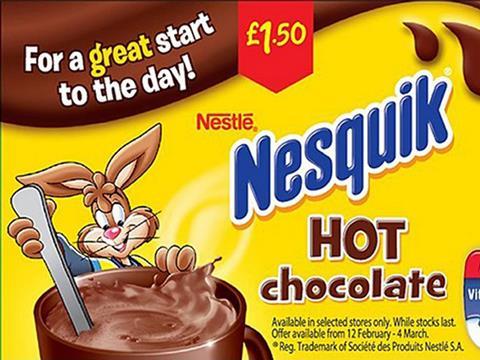 The Advertising Standards Authority has upheld a complaint against ads for Nesquik hot chocolate that appeared on bottles of Asda own-brand milk.

The authority ruled Nestlé’s marketing that the product was a “great start to the day!” breached EU health claims regulations and could mislead parents about the healthiness of the product.

The Children’s Food Campaign submitted a complaint about the ads, which featured an image of the Nesquik bunny stirring a cup of hot chocolate.

Nestle UK claimed the ad did not encourage poor nutritional habits in children. It said the The Nesquik bunny was not the main focus of the ad and had been “carefully designed” to convey a physically active, energetic character who could promote a healthy lifestyle.

It said the label was targeted at adults who were shopping for their family, rather than at children, adding that the claim “For a great start to the day!” highlighted Nesquik as a potential breakfast option for the whole family, to be considered alongside other breakfast foods.

However, as well as breaching EU rules on health claims, the ASA found the marketing was in breach of the voluntary CAP Code on non-broadcast advertising, with the cartoon rabbit considered likely to appeal to children.

Campaigners said the case showed the need for tougher regulation on the industry.

“Without stronger rules, more quickly enforced and with higher penalties for repeat offenders, there is little incentive for companies to improve their marketing practices,” said Malcolm Clark, co-ordinator of the Children’s Food Campaign.

“The government should no longer leave marketing rules in the hands of industry and advertisers, but take a stronger lead in its forthcoming obesity strategy and introduce tougher restrictions protecting children.

“Supermarkets also need to step up and take responsibility for the promotions that go on their shelves. Asda and other retailers should follow Tesco’s lead in asking more from the big brands they stock.”

The ASA turned down a separate complaint about the Asda promotional offer, which claimed it was irresponsible because it ran during a period when Asda’s own-label milk was promoted with the “Sugar Swaps change4life” logo on the mySupermarket website.

It is not the first time campaigners have clashed with Nestlé over the Nesquik product.

Two years ago, after an 18-month investigation, Nestlé withdrew nutritional claims made on its website, though the case was resolved informally without a public report.