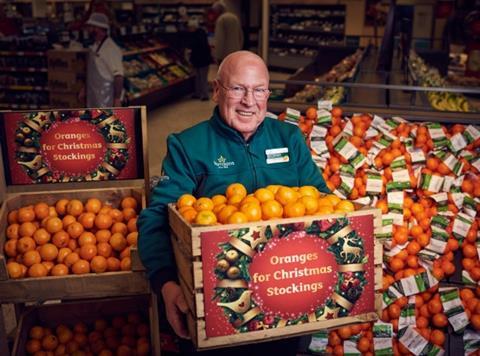 Morrisons is hoping to inject some life into a fading Christmas tradition by handing out 200,000 oranges for stockings this weekend.

Wrapped oranges will be given away at stores across the UK from tomorrow (16 December), with story cards detailing the history of the tradition.

The supermarket partnered with folklore expert and Exeter University professor Nick Groom for the story cards, which tell how Father Christmas dropped gold coins down a poor family’s chimney.

The coins are said to have landed in children’s socks left hanging out to dry by the fire, giving way to the tradition of leaving oranges in their place as a reminder of generosity and seasonal goodwill.

Yet it was dying out in many households, said Morrisons, with just 13% of children waking up to an orange in their stockings on Christmas morning according to recent YouGov research.

Just 2% of people still went carolling, the research claimed, while only 6% put a sixpence in their Christmas pudding and 21% left carrots out for Rudolph.

“We want to help keep these traditions alive and help parents pass on the stories behind them to their children,” said Anna Lane, Morrisons’ head of customer experience. “If Father Christmas wants to swing by and pick up an extra sack of oranges we’ll be happy to help.”

The move would also combat misconceptions as to when citrus fruits came in and out of season, added the super.

Indeed, more than a third (38%) of consumers believed they were out of season in winter, according to YouGov, when they are actually at their most abundant.