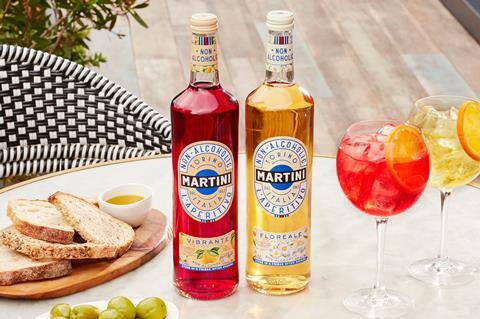 Bacardi is taking its Martini brand into the booming low & no drinks sector.

It has created a duo of drinks – Vibrante and Floreale – made with “the same quality wines that are used in Martini’s classic vermouths”, said Bacardi, with the booze “gently removed before they are infused with a selection of sustainably-sourced botanicals.”

Vibrante was “balanced with Italian bergamot to create a fruity aperitivo”, while Floreale “takes inspiration from the delicate sweetness of Roman chamomile”.

“Times are changing, and consumers don’t want to feel like they are missing out when they are being more mindful about their drinking,” said Martini global VP Nick Stringer.

Martini is recommending the drinks be served by combining 75ml with 75ml tonic over ice with orange.

The launch comes as aperitivo-style drinks have surged in popularity over the past year, largely led by rival Campari’s Aperol brand, sales of which grew 20% across the world last year according to Campari’s recent full-year results.