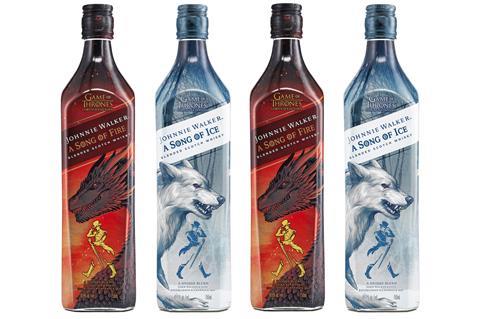 Diageo is further boosting its range of Game of Thrones whiskies with a duo of new Johnnie Walker variants.

The former features single malts from Clynelish Distillery and “exudes a crisp, clean taste” while the latter was “rich and spicy, boasting flavours of subtle smoke from the peated malts of Caol Ila Distillery”, said Diageo.

The drinks are the latest in a series of launches from Diageo that tie in the hit show. White Walker, the first, launched in October last year.

It was followed by an entire range of whiskies based on the warring houses of the show’s fictional realm, Westeros, in early 2019.

The news comes as Diageo has recently embarked on a massive £150m project to boost Scotch whisky tourism, which will include the construction of a huge visitor centre for the Johnnie Walker brand in Edinburgh.

However, the brand itself has not performed well in the supermarkets this year. Sales fell 7.1% to £17.5m over the year ending 20 April 2019 [Nielsen].