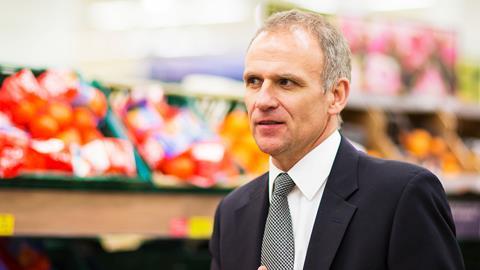 As Tesco shrugs off turmoil, can it be invincible again?

Tesco CEO Dave Lewis was in a chipper mood this morning as he announced a 28.8% rise in pre-tax profits on the back of a 1.7% increase in like-for-like UK sales in the year to 5 March.

It was not just the performance over the past 12 months that Lewis was so obviously proud of. He was able to declare himself “very confident” that the retailer would complete its turnaround goals during the 2019-20 financial year, marking the culmination of a dramatic period in Tesco’s now 100 years in business.

After being parachuted into the role in September 2014 with the mission of returning the once invincible retail behemoth to its former glory, Lewis’ best-laid plans were soon in turmoil after the discovery of a £263m black hole in its accounts.

The fallout from that scandal was still being felt as recently as January when Carl Rogberg became the last of three former Tesco directors to be cleared of fraud and false accounting.

And Lewis insisted today that he had no regrets over Tesco’s £129m deferred prosecution agreement with the Serious Fraud Office, pointing out that the charge – that Tesco Stores was involved in false accounting over a two-year period – was true; and that the SFO’s decision to press criminal charges against certain colleagues was separate and should not be conflated.

That scandal also resulted, of course, in a fundamental overhaul of how Tesco conducts its dealings with suppliers, a move that Lewis was keen to point out today had recently earned Tesco its best-ever score in the independently run Advantage supplier survey. Indeed, Tesco has now topped this ranking for the past three years.

It’s not the only unknown that Lewis has had to deal with. As he pointed out today, the assumption for the turnaround was that the market would be in deflation, and a fall in sterling had also not been anticipated.

But somehow Lewis has been able to steer the ship into calmer waters despite all obstacles, both known and unknown.

The main challenge was to stem the tide of Tesco shoppers jumping ship for the discounters. The recent financial performances suggest he has had some success in this. But with like-for-like sales barely above inflation, it remains the key challenge for Tesco and indeed that remains the case for all the big four supermarkets, in whatever stage of their recovery they may be in.

Tesco currently has two major strategies aimed at taking the fight back to Aldi and Lidl: its new discount format Jack’s; and the Exclusively at Tesco range.

Lewis confirmed today that it was committed to having opened between 10-15 Jack’s stores by the end of the year. The ninth, in Rawtenstall, Lancashire, opened last week. And he professed Tesco pleased with the format’s progress to date, including some important learnings, he said, and reported on research showing a positive net promoter score of 64%, and the fact that 94% of Jack’s shoppers had said they would be happy to return to the store and recommend it to a friend.

But there was precious little detail: he didn’t say just how many shoppers were going in the first place and whether, therefore, sales had met or beaten initial expectations and targets. He didn’t say what lessons had been learned. He didn’t comment on reports that Jack’s was focused now on bigger pack sizes.

In short, the Jack’s storyline was all a little unconvincing. And trying to beat the discounters at their own game still seems counterintuitive as an objective: it isn’t likely to leverage the many strengths of Tesco, which is about being big and being all things to all shoppers. If anything it plays into the hands of the discounters.

Opinion: Can Jack’s do enough to tackle the discounters without cannibalising Tesco sales?

Personally I see far more value, pun intended, in cranking up the ‘Exclusively at Tesco’ range. Lewis says Tesco is monitoring the price of this range closely against the discounters and claims that in many instances it actually beats them on price.

Further expansion of the range is planned, both in terms of growing it beyond 400 products, and also getting it into more Tesco stores, including c-stores.

This is where Tesco and Lewis need to focus right now, alongside the continued integration of Booker.

When Tesco gets the basics (pun intended) right it can be irresistible and Lewis is clearly getting a lot of the basics right at the moment, even given the major distractions he has faced. Perhaps now is the time for rivals to start worrying about what Tesco can do with a clear road ahead.